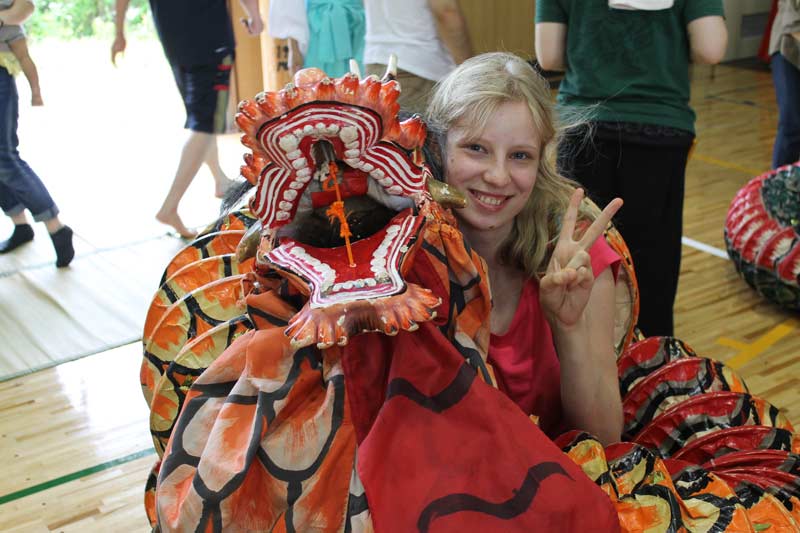 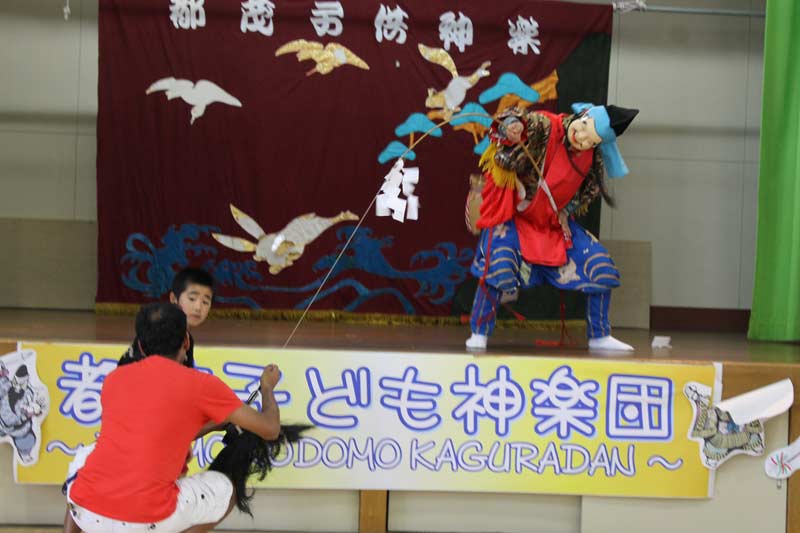 Today was our host family day in Masuda city. After a luxury breakfast, Nina and I went painting with our host-mother. She taught us how to paint traditional Japanese style flowers on a piece of bamboo. The result looked pretty good, and it was quite easy to do as well. Next, our host-father took us to his own vegetable garden and rice field, which were next to the house. He told us a lot about the different vegetables he was growing in the garden as he picked them. The vegetables that he grows in his garden are used in the dishes they cook, which is really amazing.

After this tour of the garden we went by car to a school, where we would see kagura (a type of Japanese play) performed by children. All the other participants and host-families were here as well. The first play was about a family whose 7 daughters had been eaten by the 8-headed dragon Orochi. They were getting desperate since their 8th daughter would be the next victim, and so they prayed to the gods. Their prayers were answered and they made really strong sake to get Orochi drunk. After an epic battle Orochi was finally defeated, and the family lived happily ever after. During the break after the first play we got to experience ourselves how it is to wear the Orochi costume, play one of the drums or wear one of the kagura costumes, which was really interesting.

The second play was about Ebisu, the god of luck, who was going to catch a Red Snapper for us to bring good luck. Of course he did not catch it immediately, and since he threw around candy every time before he would give it another try, we got a lot of candy. After a couple of times he did manage to catch the fish though, and to celebrate it even more candy was thrown around.

After the kagura we went to an onsen, where we spent about half an hour in the hot water before we went to an udon restaurant. This was definitely a great ending for a great day. 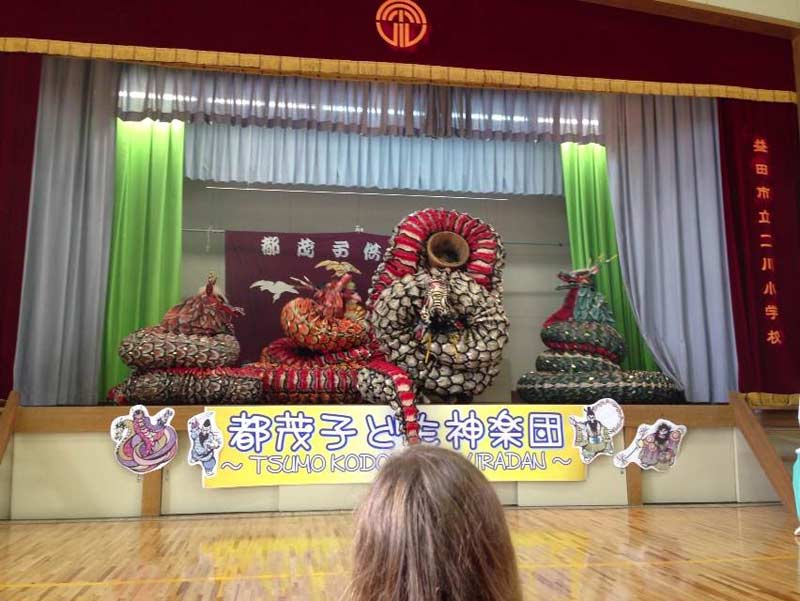 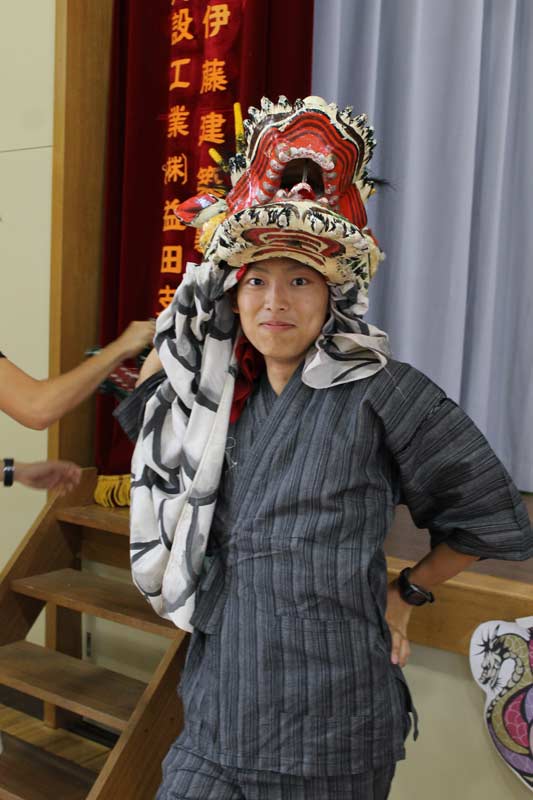 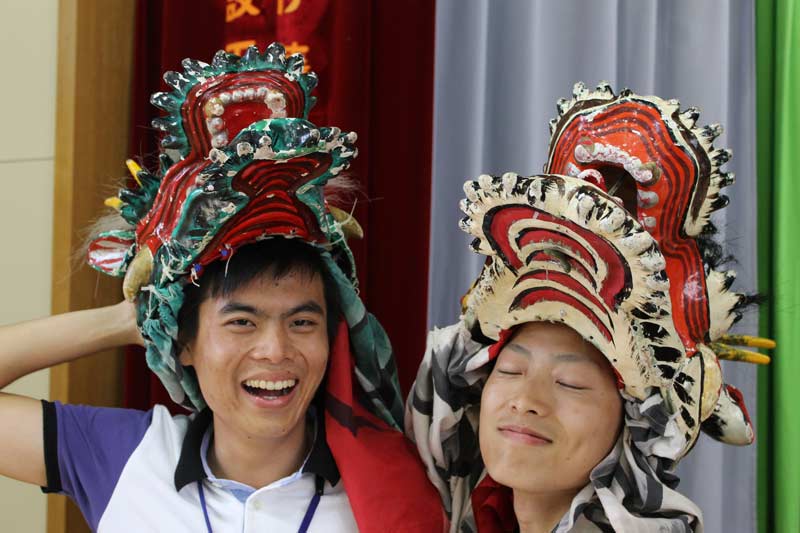 This afternoon we helped the community of masuda making mochi ‘rice cake’ with big hammers, after which we fought for food during an awesome “Nagasi Somen” lunch. 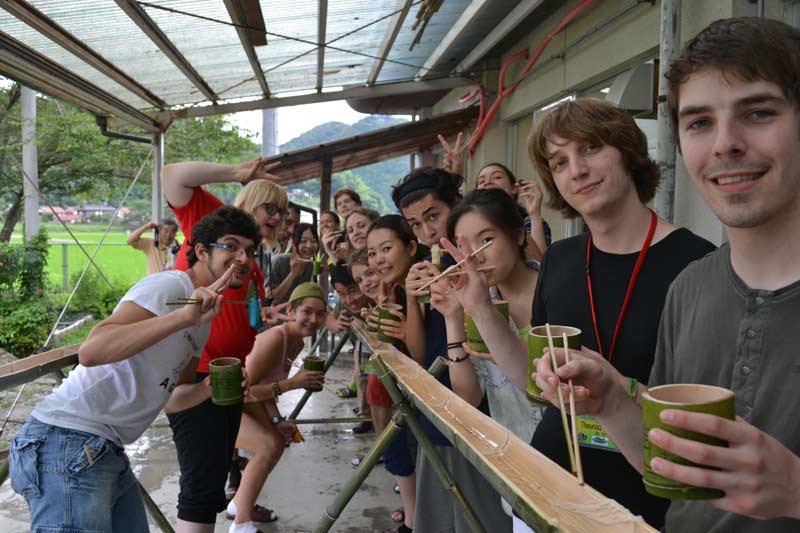 An awesome combination of food and fun! I will treasure these memories forever.

In the evening we performed the last Arigato Evento of the second session. Although it was the same show we did before, there was more excitement from the public as well as the participants followed by sadness because people had to go home after or leave their host families. We jumped, we screamed, we laughed and we hoped that the time could stop at that moment; I felt happiness dispersing like dyes in my heart.

I only had the time to stay for one session, but after these short two weeks I really hoped I could stay longer because of all the friends I made and the memories we created together.
Come back, they said. I will come back, next summer if not sooner!

The day starts off perfectly; rain is pounding down so terribly hard, arriving dry is something only the best accomplish. Today we’re doing the last school-visit of the WCI program this year, so everyone is super excited. The group is divided among the elementary- and junior high school, with eight going to the junior high school. This means that our little group is exactly the same size as the group of students in the whole school. It is actually the smallest junior high school in the prefecture. We spend the day presenting our different countries and learning part of a traditional rice-planting song called taue-hayashi. 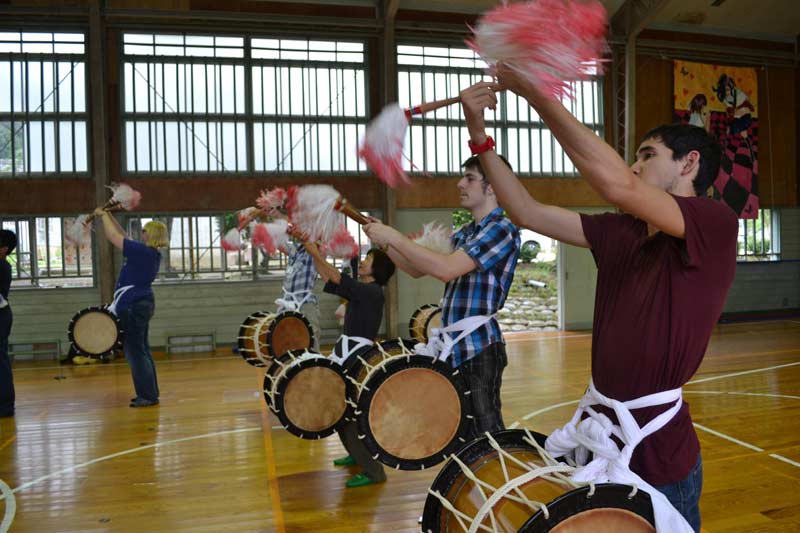 I’ll miss going to japanese schools, because the children are truly interested in my dull live. I Love it!

In japanese folklore there is an old story called Kaguya Hime. A old bamboo cutter went into the bamboo forest and saw a glowing bamboo. He cuts the bamboo and within is a little girl: Kaguya hime. The bamboo cutter takes the girl home and together with his wife he raises kaguya hime.

Today we went into the bamboo forest as well, to cut some bamboo. It reminded me of the Kaguya hime story. Unfortunately the weather forecast was not accurate. Instead of a sunny day it became a wet rainy day. Therefore we had to stop bamboo cutting even before we started, we were lucky however we did cut some bamboo before we went down the mountain on which the bamboo forest was located. 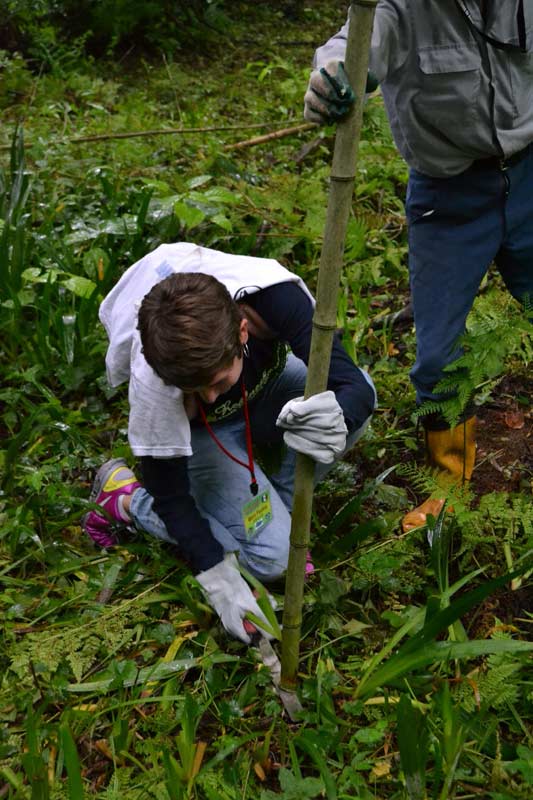 We went to a small camping site were we had to cut some bamboo into our own cups, which was actually pretty cool to use. Meanwhile we were waiting for the rice to be cooked so we could start our lunch: onigiri!!!!

Because of the knowledge of the onsen visit later on most of us were pretty exited. The day ended with a visit to the nursery school which was behind the host family house I currently live in. Because it will soon be tanabata we made decorations with the 1 to 4 year old kids. It was great! 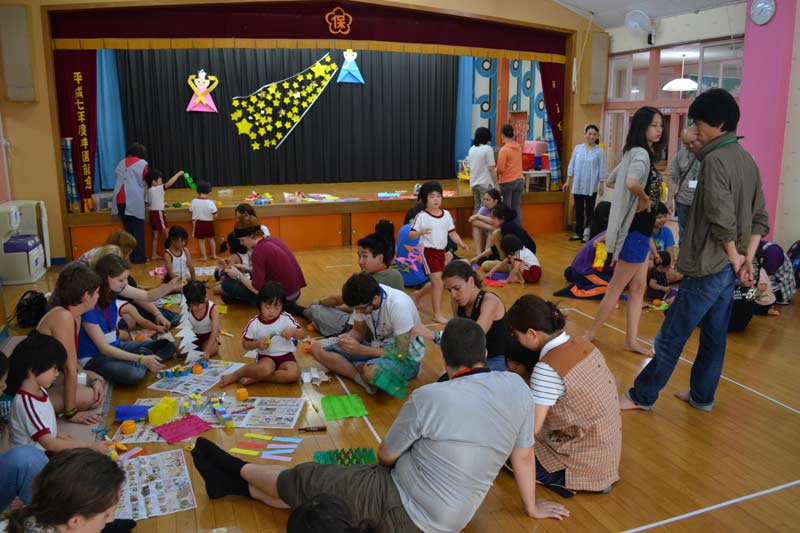