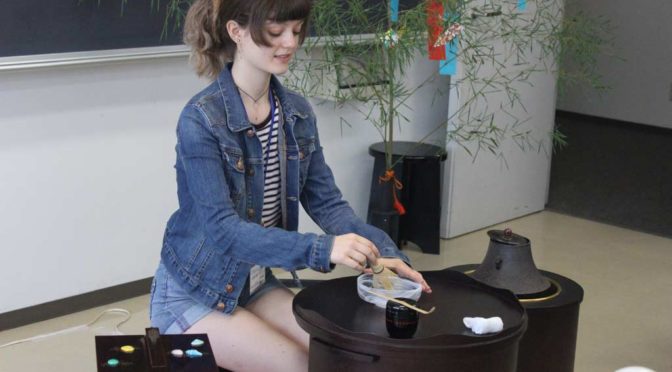 When I woke up today, I felt like laying in a sauna. I think it was about 40 degrees Celsius in my room, although it was only 7 am. Atsui desu! In the kitchen, there was already a nice breakfast waiting for me. My host Mom made it for me. She is so kind. It is always fun to talk to her; she hardly speaks English and I don’t understand Japanese, so we lead our conversations with a lot of gestures and simple words; the best way to get to know a new language, I guess.

Later, we drove to Chuo Gakuin University. We were going to experience a traditional tea ceremony, chadō, and discover Japanese calligraphy, shodō. After everyone from the group had arrived, we took a seat in a large room where the students and teachers received us affectionately; they were happy to meet us. In front of us, a young woman, wearing a Yukata, made one cup of matcha tea. During the procedure, she used different utensils and every single movement was perfectly practiced. She seemed to be in her own world; looking at her was calming. I didn’t expect it to be so accurate and it was really admirable. After that, we could try it. Somehow, I was a bit nervous because even the cups are held in a special way! But the students helped us.

We also got to know origami and folded some pretty cranes. While eating lunch, we became acquainted with the university students and their teachers. It was really interesting to learn about the way they live in Japan and about their studies. After lunch, the shodō students showed us a presentation where they were writing on a huge piece of paper. It nearly looked like a dance which was quite impressive. We were involved too and could write on a fan. Shodō is a peaceful and comforting activity; I think everyone had fun!

Later on, we interacted with the students while playing games and drinking tea, which was actually Cola. And this is, in my opinion, one of the best things of World Campus Japan: you meet people from all over the world. You make new friends and enjoy great moments with them! During my short time here in Japan, I got to know so many nice people; it‘s amazing! I spent the rest of the day with my host family. In the evening, we watched anime together, exchanged knowledge about our cultures and laughed a lot!

That day, I made numerous great experiences. And imagine, it was only one day out of 3 weeks, where I‘ll discover this amazing country. 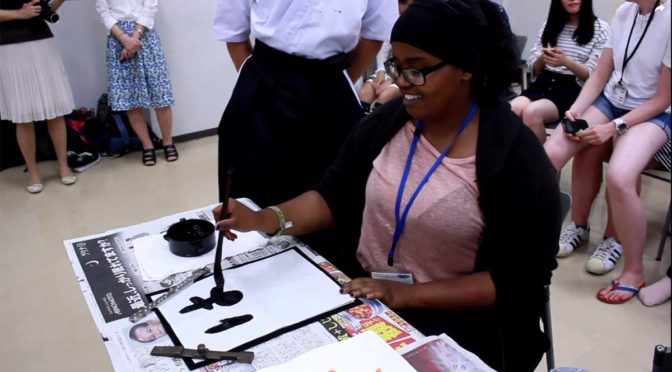 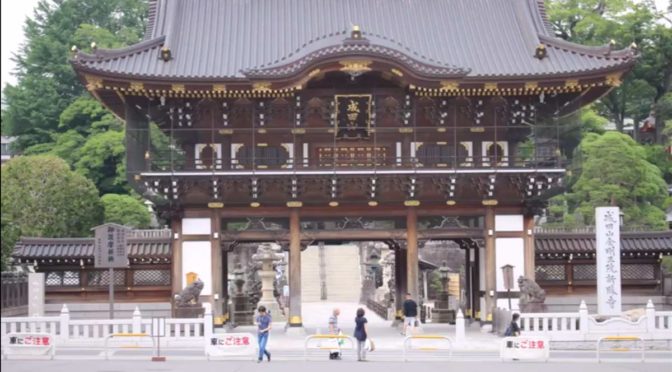 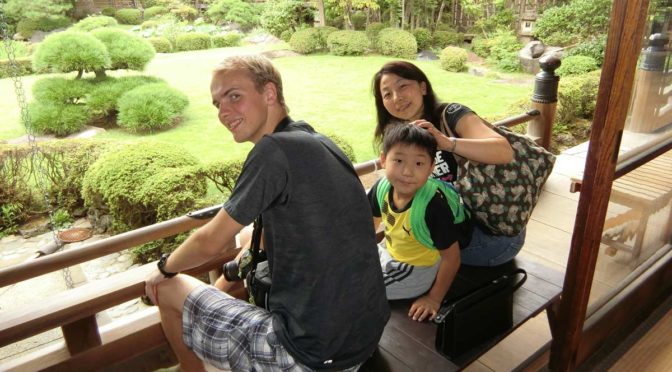 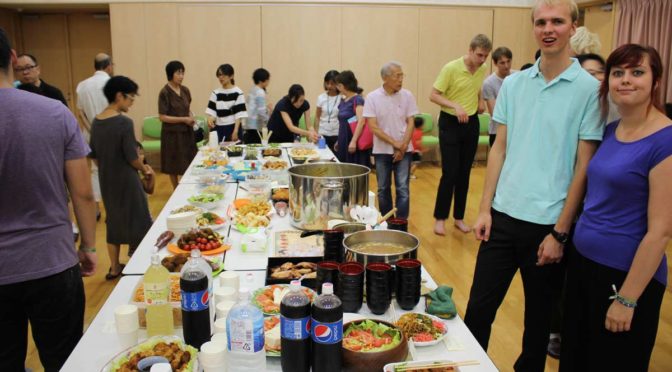 If you thought that World Campus – Japan is the kind of program that would make you feel rested, well you’re very, very far from the reality. The previous day, I went to sleep at 2:30 am, because I had to write a letter to my host family and didn’t have time before. My host family invited two other host families in the evening (so there were 8 little kids running around in the house, which might sound very cute, but is at the same time very tiring).

So the morning, with my eyes half opened, we had our first Naginata practice! Even as a half Japanese, I had no idea how this sport was done. We practiced it in a tiny room with 25 people in it doing some Naginata moves. It was actually very fun, even if I almost made a hole in the wall. I enjoyed it much more than the Kendo we tried in the previous week.

Later, we tried Taiko. I usually love it, but today the song was a bit repetitive, so we decided that it was much better to dance Bon-Odori all together instead. Here is the World Campus – Japan mentality: “If we find a way to dance and make fool of ourselves, we’ll probably do it.” I guess that Arigato event is a perfect example to illustrate that. Anyways, it was much more fun dancing traditional Japanese dance with Japanese people around, all wondering what kind of weird gaijin we were.

After eating our lunch, which consisted of onigiris and soup, we had an exciting meeting about the next city, with our beloved city runner Jürrien – yayyy!

Later we started practicing for our Arigato event. I decided to step out of my comfort zone and take a clever risk (just as Hiro-sama always says) by standing in the front row for the dance. I have to admit that even if my dancing skills are as bad as most of the participants, the dance of the Arigato event is probably one of the best part of the whole trip (as much as being thrown away by Juuso when he gets a bit excited).

During our Arigato event, I saw my host mum crying. This is the kind of thing that makes you feel very proud of yourself, and which makes World Campus – Japan such a great program. Even if it’s just one week, the people are accepting you as a member of their family. Creating bonds with different people from different age is very rewarding.

After the arigato event, the Abiko city and all the host families prepared food for all of us – yayyy again! I started running around with the little kids and got exhausted (again)…

But guess what? Tomorrow for our host family day, we’ll wake up at 4 am to go to Tsukiji fish market. Don’t get me wrong though, I am very excited, but am I ever gonna have a normal amount of sleep one night during this program?