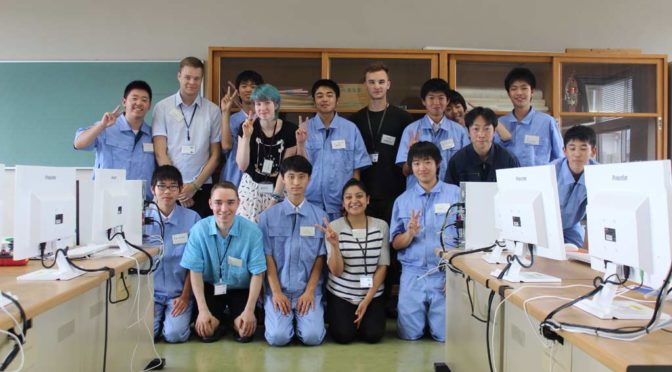 Today we went to Miike Technical High School. This school has about 600 students and most of them are boys, but there are some girls too. The day started with the principal saying some words, then a presentation about the school. After that we were also shown around a part of the school before it was time to go to the classes. The first period my group participated in was PE, with a class with only boys. I was surprised about the discipline during the lesson. When warming up they ran in a group and they were running in almost perfect lines. In Sweden you just run, you don’t even run at the same speed. After warming up we played volleyball. It was really fun. But sadly I can’t play volleyball, so I felt kind of bad for all the boys on my team when I wasn’t able to catch the ball.

After lunch it was time for English. The students divided into groups and one of us went to each group. They asked us questions in English about, for example, were we come from, what our favorite Japanese food is and what we do in our free-time. After a few minutes we rotated and went to the next group of students. We got to talk to all of the students in the class a few at a time as each group of students asked the same questions. I had a great time interaction with the students, they were all very nice and did their best with English.

These two periods were quite normal as every school has these. But it was after that that the more special lessons began. Since this is a technical high school they have some different classes, like programming and making things out of metal. I don’t know what the other groups were doing, but I got to participate in the Chemistry class. We formed small groups or pairs with the students. They did something that I never got to do in my Chemistry classes in high school; they melted glass and made beads! It was really cool and all the students knew what they should do. We got to choose two colors and then they used a burner over which they held a glass rod to melt the glass. When the glass started melting and dripping down they caught it with some sort of metal stick (I have no idea what it’s called) and turned the stick around so that the glass formed a bead around the stick. They continued turning it to make the right shape. I also got to try to do one! At first I was a little nervous and didn’t really want to do it. But I did and it was fun to try something new!

After a ten minute break the lesson continued. Now it was time to remove the glass beads and make some sort of accessory, I think it is for your cell phone. Sadly the one I and also the one the boy in my group made were stuck and couldn’t be used, but the girl in the group was able to use hers. All the students did make the accessory though, I think that they had made some beads earlier or that there were beads that a teacher had done beforehand. Then they gave them to us! I’m really happy that I got something to keep as a memory of our time at the school, since I had a really good time and enjoyed interacting with the students, even though I’m quite shy.

Lastly I would like to say thank you to all the students and teachers who let us come and participate in their classes. I hope that they enjoyed our time together as much as I did.