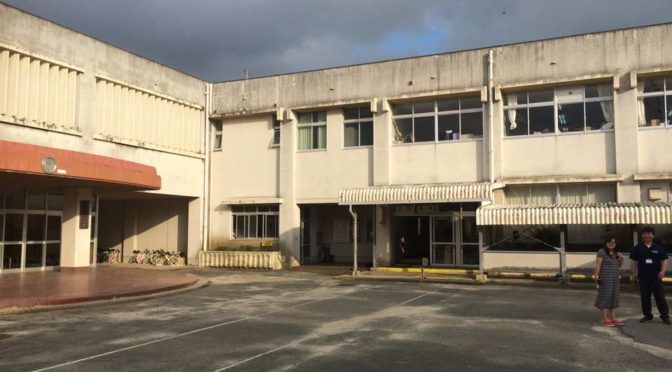 Today the WCI troop visited the elementary school of Midorigaoka in Arao. First off was coordination as per the usual. This means the explanation of the local rules to newcomers such as myself. I was surprised to know the things that looked like canals are used when 2 paths cross each other, namely ones for people with dirty shoes and clean shoes. The desire to separate the clean and the dirty was truly striking.

Afterwards we were guided to the gym where we rehearsed some Arigatou event moves. Soon after we introduced ourselves to the school kids and performed our little dance. The kids looked mesmerized by it. I don’t know why though, and it certainly wasn’t because our skill was at power level OVER … Hiro says they’re just like that …

After the Introductions we regrouped at our meeting room and split up into groups and taken to different classes. The group I was in went to a music class. That singing was probably closer to screaming than music, but I don’t blame them. It was clear that they were just that excited to have us there. They included us in some of their songs and activities. My favorite was the “Jankenpo train”: basically Rock – Paper – Scissors and the losers train gets on the winners train until there’s only one big train of overly energetic kids. The lesson we joined after that was calligraphy (writing kanji). This was my favorite lesson since it was mainly us complete beginners who got tutored by the kids. They made us copy the Kanji of their names and such. The lesson after that was music again, which was much the same except different songs and games( and screams). Lunch today wasn’t as stressful as yesterday, since it was properly organized. There wasn’t really enough time again though, since our chopsticks level isn’t Level Asian.

Next was Clean up and Play time, so basically free time with the kids. I really enjoyed this since the kids kept walking up to me with their energetic jibberish somehow trying to tell me to play too. In the end we all played Football since it’s the most international sport. After our usual regroup at the library/meeting room the school surprised us with an assembly of all 5th class kids in the gym. There was much jibberish said, thanks made and fun had. Of course the last lesson was the same setting as the previous one, but with the 6th graders instead. However, instead of trying to talk to each other we were told to play games together. We did the “Jankenpo train” again and also some kind of speed recognition game. Bless the Japanese kids for the recognition game. They noticed we couldn’t read Japanese and made it easy for us. At the meeting after one of my friends said he was easily winning till he said “give it 100%” and after that he didn’t make a single point. Remaining after all of that was a quick meeting and thanks round to the teachers/principal, clean up and information round about the next day.

All in all I have to say it was an excellent day. Thanks again to the teachers who made it possible for WCI to visit, I hope you and your students not only enjoyed but also learned lots today.