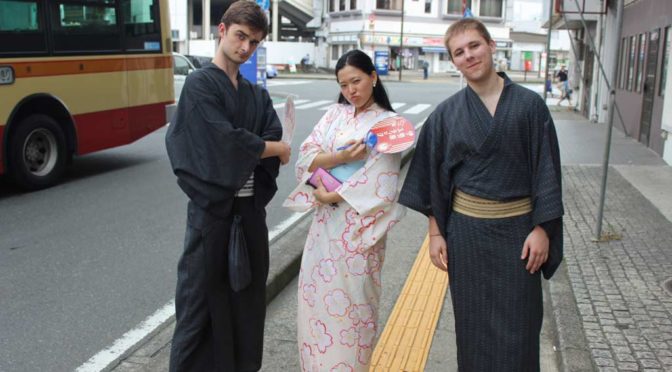 Today we in the World Campus – Japan program went to a summer festival. I had been looking forward to it ever since I had heard about it, and it ended being a bit different from what I had anticipated. Some of it was honestly a bit disappointing while it still ended up being a very fun and memorable day.

We started the day meeting up in a building at the street where the festival was going to be held. We had a meeting, going through what was going to happen during the day and what we were supposed to do. After this we got an assignment where we would get a piece of paper each that we would then pass around to the people around us and write down our honest thoughts of each other. After this we had lunch, a short break and then it was time to change into the kimono that each and everyone of us had gotten as a gift. I am a bit taller than most so the kimono did almost not fit me but I still liked it and the sandals we got were not terribly uncomfortable either, it was time for the festival to start.

We had tent at the festival were we worked in shifts. Before my shift started I took a look at festival with a few other friends. We did not have time to look at the whole festival (mostly because we got almost lost looking for an atm) but we did manage to buy something to drink and one of my friends played a game in which she won a balloon. (I did not understand the rules of that game)

Surprisingly, I enjoyed working at our tent more than I did the actual festival. The world campus tent was a café where you mostly got something to drink and then chatted with us participants. Me and my Swedish comrade talked with quite a few different people through our shifts, and I did enjoy all of it.

Other highlights from the festival would be the nagashi somen that almost run through the entire street. Nagashi somen is when you have several pieces of cut bamboo with water running through it. Somen noodles run with the water and you try to fish it up with chopsticks and eat it. I find really fun but I had already tried it and the line to get chopsticks was long so I ended up not participating in this event. There was also a troupe of samba dancers who regularly danced through the entire street and a bit more. I had not expected the samba dancers.

Once I had seen the whole festival, all the tents and such, I was a bit disappointed because there were mostly food stands and I could not find any interesting food. Nevertheless, the festival was ending and the last event was a sort of discoish dance that we learned on the spot and participated in. Part of why that was fun was because we danced in our kimono and sandals which made it all feel a bit more accomplishing. The dance was a surprisingly fun ending to what had been a surprisingly fun day although for me the kimono was the highlight of the day. I think the kimono is one of the best souvenirs I could have ever gotten on my own and I will surely remember this day if only for that.