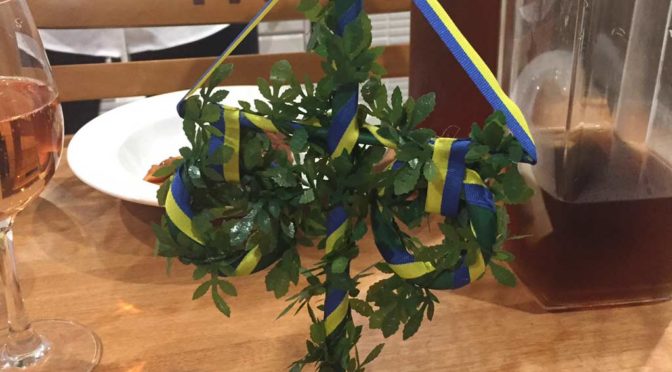 I woke up at around 6:45 am and got out of the bed after my alarm went off for the second time. For breakfast my host mom had made rice and soup and she had also put different kinds of furikake (basically a type of sprinkles that you put on rice) on the dinner table, with different flavours like tuna roe, salmon and sesame. It was so good and interesting to eat that I actually had two bowls of rice that morning.

After breakfast I packed my things for the day, freshened up and put on makeup and around 9:00 am me and my host mom were out of the door and on our way to the destination of the day, which was the prefectural university of Kumamoto. After arriving, gathering and having the morning meeting we went to the CPD centre to meet the students of the ELLA program. The students arrived after a few minutes and sat down with us. We later stood in two lines, WCI on one side, ELLA in the other and we had 40 seconds to introduce ourselves and get a hang on who we where. After that we played something called “the stereotype game” where on three two-sided whiteboards we wrote stereotypes that we had about the other countries and later the representatives from the countries got to explain some of the things that were written. Most of the things on the Sweden board were about snow, shrimps and the cold.

After that we went to a special classroom to eat lunch consisting of Obento lunches and talk with the students. I told some of the students about Swedish food and celebrities. After lunch we did some calligraphy and got our names written in Kanji. My name became Shigure which kind of means the sound of a drizzle of rain in fall, I also got my last name in kanji which was a bit easier as my name literally means south 南. We drew different words like ‘love’, ‘dream’ and ‘friend’. After about an hour or so we moved back to the CPD centre where we made some origami to put on a plastic bamboo branch and writing wishes on the origami.

Time is up and it was time for some group photos and waiting for the host families to pick us up. My host mother drove me home and we made dinner together in the form of Japanese hamburger steak. What I didn’t expect was that along with the food she had also brought appetisers from the Italian restaurant where she worked. While waiting for the steaks to finish in the pan we were feasting on bruschetta and liver pâté with crunchy focaccia pieces.

After dinner we discussed Swedish holidays and when my host dad came home from work we looked at pictures of my home city and my university. I also gave my host their gifts which were a Swedish midsummer maypole and a glass bowl which was nice considering my host mom was collecting glass. A very unique way to celebrate a midsummer weekend I would say.