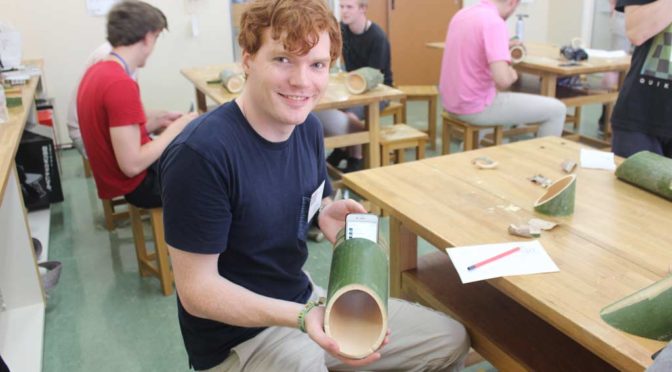 I woke up at 7.30, at which point it was time for breakfast. I prefer to sleep as much as possible, since World Campus can be quite tiring. Today, like yesterday, we had toast and miso soup. There was toast with melted cheese & piman (Japanese green bell pepper,) blueberry jam and the newcomer, coconut oil. I had never tried toast with coconut oil before, and it turned out to be a bit… greasy. It was totally edible though, but it’s not my favorite condiment for toast. The day had started with something I had never done before, and it was not the only thing this day.

Arriving at our location at 8.30, I was ready for today’s first activity, bamboo crafting. One of the locals, Mr. Higuchi, told us a lot about bamboo in Japan, both things I knew and some I had never heard before. He told us that bamboo sprouts used to be a common food in Japan, but that these days it was not so popular anymore. As a result, areas that had previously been used to grow bamboo sprouts are now covered by huge bamboo forests. Bamboo grows about 15 to 20 meters in a year. Because they are so tall, they block out the sunlight so other plants can’t live there. As such, bamboo is a bit of a pest. It is important to keep cutting down bamboo trees, and Japanese people try to find uses for the excess bamboo. Mr. Higuchi cut down some bamboo trees for us the day before, so we had the opportunity to create a bamboo “smartphone speaker.” It was a contraption that worked similar to a flute, where the sound from the smartphone would be channeled in one direction through the bamboo instead of going in all directions, hence enhancing the sound. In order to make this, we used a special saw made for cutting bamboo. Unlike western saws, it could only cut when pulling it towards you, making it more efficient, but less flexible.

After finishing the bamboo speaker, we learned about Japanese ribbons. In Japan, it is common to give money as gifts on certain occasions (such as funerals,) and one usually puts the money in an envelope and decorates it with a ribbon. The color of the ribbon indicates the occasion, and the size indicates the sum of money. We learned how to make the most basic ribbon, awai musubi. We then made a slightly more complicated ribbon, which was supposed to look like a crane, that we used to decorate our bamboo speaker.

Next we each made our own stamp. In preparation, I had asked my host family what they thought would represent me. We ended up choosing the kanji与 (“yo”). It sounds like the first syllable of my first name, and it also looks like the number five. In Japanese, five is pronounced “go”, which is the first syllable of my family name, so it seemed like a perfect choice. It also means “give” or “grant.”

As our final activity of the day, we made okonomiyaki with some locals. Okonomiyaki consist of a batter similar to pancakes, and usually contains cabbage, spring onion and other fillings (in our case, cheese.) It is cooked in a frying pan shaped like a thick pancake with pieces of pork on top. Finally it is served with a special sauce, mayonnaise, nori (seaweed) and fish flakes. It was delicious as always!

In the evening we had a couple of hours to shop in Aeon (a large shopping mall,) before being picked up by our host families at 17.00. This evening my host family had a guest – a student who was being taught English by my host father. Even though she was very shy, we had a great time and enjoyed a lot of food and drinks together. My host father also played some songs on classical guitar for us, which was amazing. Overall this was yet another fantastic day with World Campus this year!