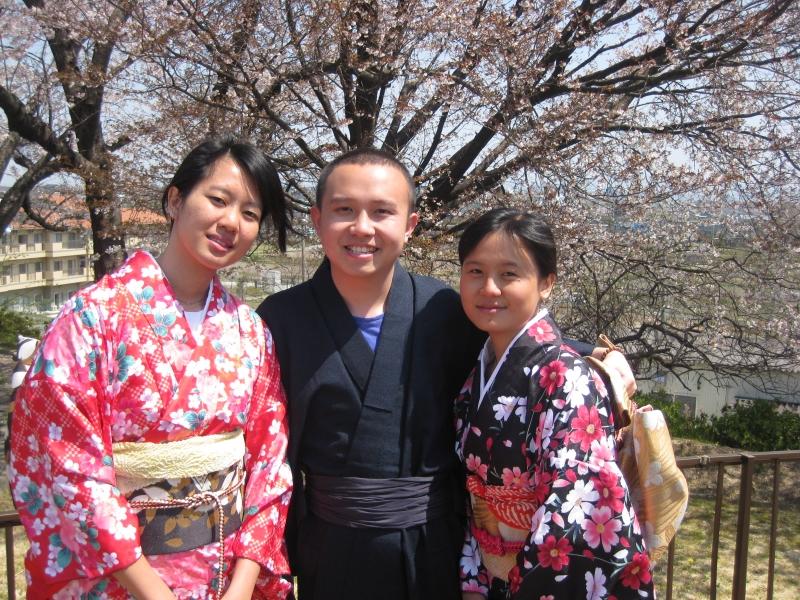 Sanmon wo dareba nihon zo chatsumi-uta
Coming out of the temple gate, the song the tea pickers, It is Japan!

March 9th, the new day I arrived in Suita city, first time I breathed in Nihon’s air, fresh and brand new. The spring fragrance smelled so smooth and even though it was a bit chilly, I could feel something great would happen soon. Yeah, that day was our arrival day for WCJ Spring Tour 2009. I was looking forward to meeting with the other participants, the staff, Hiro and Hideto! Yeah, can’t believe I am back again after the last summer. 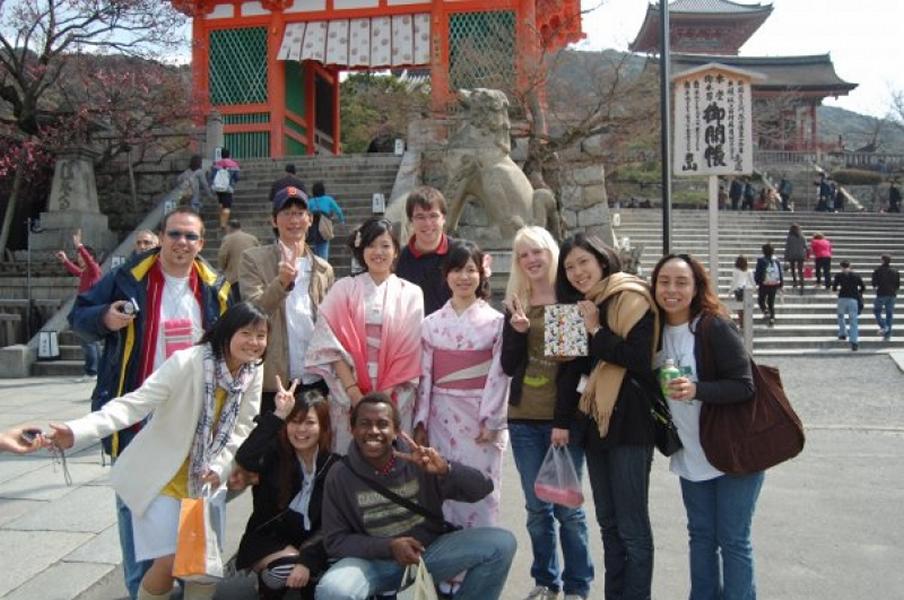 Suita city was the first city of this tour. Suita is a modern city with most of its citizen commuting to other big cities for work. Teenagers, the young generation have become the city’s symbol. The Local organizing committee (LOC) and Kansai University DUCKS were big components of this city’s success. They helped us a lot, gave us support, as well as shared nice moments, and great friendships. Everything always starts with Thank-you event (Arigato Evento) prep, because the show is a crucial part of the WCI program. Even at the beginning, we faced some obstacles and difficulties with singing and dancing Japanese songs and dances, but we overcame all of that. We had such a great time in Suita city. We had a great show at the ABC festival, visited the famous Banpakuen Park, experienced traditional Japanese culture including Naginata, Sumo, and Shamisen. We also interacted with university students and got know more about Suita city. And Universal Studios Japan was unforgettable to explore!

Uda city, our second city was quite different from the former city. Uda city, as a part of Nara prefecture has a lot of natural resources, great environment, and nice food! Yeah, Uda is imprinted on our minds as a city with bunches of ‘oishii‘ (delicious) food. Arrival day was awesome; they greeted us with a wonderful party, starting with traditional Japanese dances, a game for matching us with host families, and fantastic food! We explored about how the people live in balance with the beautiful nature, beginning with a walk rally. Then we toured the famous Muro and Todaiji temples which gave us a lot of insight about Japanese religion. We also dwelled deeper into Japanese culture by taking part in a tea ceremony & experiencing the majesty of Japanese swords. Our stay was made the more perfect with an emotional visit with senior citizens and a phenomenal Buddhist temple party! 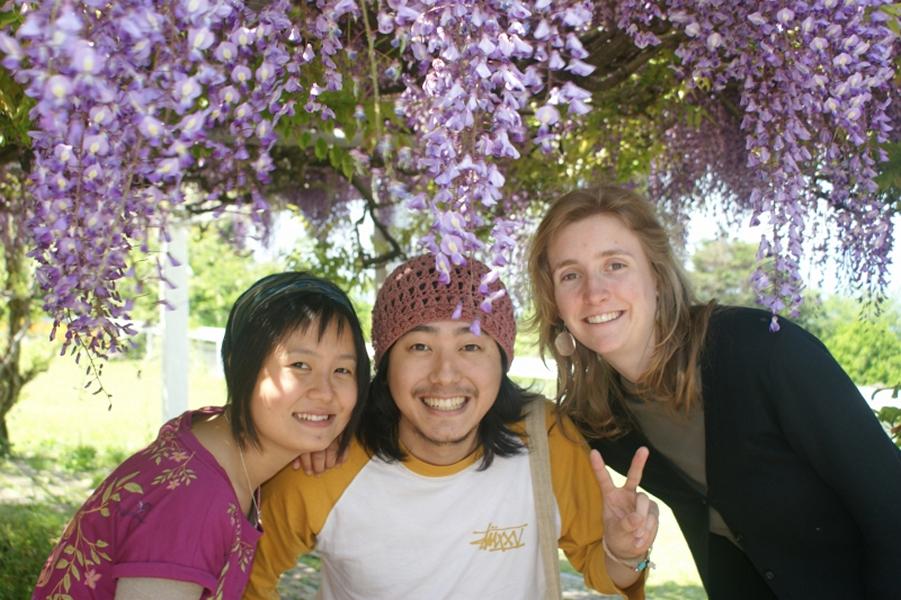 March 22nd, Sunday morning, it was a bit rainy, as if the realm knew we would be separated soon. Yeah, that day was our good bye time with the local people and also with the participants who were going back to their home countries ( Eric, Lily, Shoko, Shihoko, and Herbling ). Every piece of our hearts cried and we couldn’t stop hugging each others. Even though we stayed together only for two weeks, we felt we are engaged as one big family, one circle, and one great group! For rest of us who were still continuing to the second tour, we got three days off, where we had our freedom to explore more of Japan.

March 26th, Abiko city was our next city. Located near Tokyo, it is known for all the people who commute to Tokyo for study, work, or other reasons. Even though this city is next to a huge metropolitan city, there is a big difference between the two. Abiko keeps its natural resources properly. They, recycle, take care of the water, and are aware of many environmental issues. New people, new city, new session, new environment, that’s WCI. We can learn how to make adjustment in every single place we are. It’s the most basic and important thing we need to have to become a global citizen. Yep, we started again. The head of the LOC was so hilarious, the “Boss” as we called her 🙂 ! The kappa dance, potluck party, o-hanami, and even the Hawaiian dance were so unforgettable!

What comes to mind when you hear Toyota? Yep, Toyota is the biggest automotive company, not only in Japan but throughout the world. Toyota city is the city where Toyota company has its headquarters and we were lucky to be part of this vibrant city. Toyota city: a great community, huge plants, nice people, and high tech facilities. Even though it’s a modern city, that didn’t mean we couldn’t get our culture experience. Our arrival coincided with the cherry blossoms that were blooming perfectly. O Hanami with kimonos, what a wonderful moment! It was the first and last time for us to enjoy sakura dressed up in kimonos. Yuhuuuu 🙂

Hito koishi hitomoshi goro wo sakura chiru
My heart is full of yearning, The candles being lit, Cherry blossoms falling

Second session wrapped up. A time for saying GOOD BYE again. Every meeting has a consequence… GOOD BYE in the end. How can we express our feelings? It is hard to say goodbye to everyone who got along with you for those weeks. But it’s the reality, we can’t make any bargains or fight it. Good Bye Toyota , Good Bye Daniel, Kaho, Birgit, Jaime, Selly, Elitha, Mustafa, Nao & Amar. We then faced the next and the last session in Spring Tour 2009 in Kyushu. Kyushu Island is famous for the beautiful nature, nice weather, authentic food, and great people.

Omura was our first city in the last spring program. Yohanes and I arrived before the others and were picked up by the extravagant Up With Omura CEO, Mr. Okuma. He is a unique and great local person who supported our tour. Our theme in this city was peace and conflict as we focused on what happened in Nagasaki city 63 years ago. It gave us an overwhelming feeling when the survivor told us his real experience struggling against death. Tremendous emotions mixed in my heart; sadness, yearning, loathing, and bewilderment, everything came in at the same time. From that precious experience we could reflect about what happened and keep sharing love amongst our families, friends, lovers, and everyone. Stop violence and respect others, keep living in peace with each other. That is one of worthy lessons we learned. Besides that, we trained ourselves in Kyudo, the traditional archery sport from ancient times, and Shorinji Kempo, a martial art. We ate champon, a traditional noodle dish of the area. We were also part of the Fureai event, which was a big event where many handicapped people came together and had fun with each other. The best moment was when we interacted with them. We didn’t feel like we had any differences. All of us are same, we are human being with some minus and plus things. 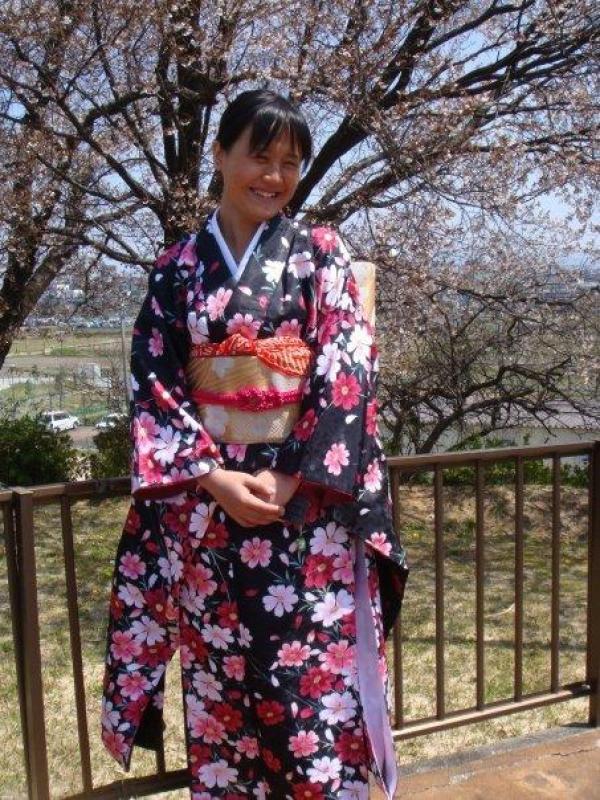 Finally, we encountered the last city of this tour. Kumamoto city with its many budding resources; farming, stockbreeding, plantations, and so on. As we learned before, a disease attacked Minamata city more than 50 years ago, but they rebuilt and there is almost no more scars left. One more special thing is the Cradle of Stork of Jikei hospital. It is a unique operation of hospital which is helping unwanted babies. Yep, that was my first time to hear of this kind of hospital. Many emotions erupted in my mind, how glorious their aim is. Moving from the heartfelt topic, we had a lot of fun in that great city. Yuhuuuuu we had the PURPLE PEOPLE! They were volunteer workers from the local community. We had Mrs. Maeda, the nicest LOC CEO. We explored Kumamoto castle in unique way 🙂 , relished the beautiful Mt. Aso, tried “basashi“, the unusual savory horse meat, and even had a party in a Izakaya restaurant!

Everything always can’t be perfect. Every meeting has a consequence; separation. It can’t be avoided. While my heart wants to keep all of them alongside with me, that is impossible. Good Bye is final challenge before we go. Time for the real Good Bye is coming; everyone has goes back to reality, their original lives and activities. Yep, GOOD BYE DON’T PANIC, but I am PANICking now. I miss everyone already; every single thing always reminds me of our efforts, our togetherness, our laughs, our smiles, our sadness, our team building, and even our hard times. Thank you for everything, all of you will be in my heart forever. I will keep you as my treasure of my life. I’m sure we will meet again someday, somehow 🙂