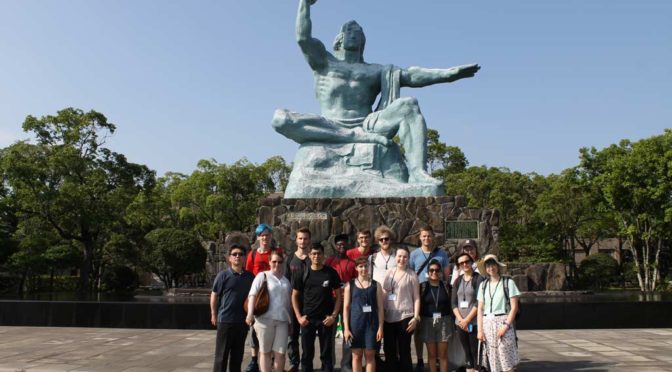 On Friday we met with the Mayor of Omura. He was a man in his mid thirties, really young – as everyone who lives here kept telling me – with a personable smile. Despite the heat he was dressed in a three piece suit, just a sign of what he’s willing to go through for his job. I was practically boiling in nothing more than a button down shirt. The Mayor, Mr. Sonoda, was surprisingly kind, especially for a leader of a city. He even brought a small gift for each of us. On any other day of this program the meeting would have been the highpoint without a doubt.

Perhaps it’s just that I’m an American, but Mr. Kiyono’s, the atomic bomb survivor’s, speech was shocking. He told us how Nagasaki was reduced to rubble by the bomb, and ravaged by fires that lasted through the night, leaving only corpses in its wake. He also told us about his sister, who died of acute radiation poisoning. On her deathbed she wrote pages about how terrible America was in her diary. It’s just… hard to grasp.

If one thing, the museum only reinforced how terrible the bomb was. The exhibit called Nagasaki the “Atomic Wasteland ” with rooms full of debris, melted glass and twisted metal. I remember most clearly the walls of buildings that were scorched black by the heat of the explosion, save for where something else took the brunt of the blast. The silhouettes are still visible, and clearly retained the shape of a wooden ladder, a washing pole, a man. It was chilling.

Today I look around Nagasaki, and I see no hint of that “Atomic Wasteland”. The city is bustling, filled with beautiful buildings and kind people. There is no stigma associated with being American, despite what my country did to this city.

How, I wonder, is this the Nagasaki that was reduced to ash? Perhaps Fumi, Mr. Kiyono’s sister has the answer. Earlier I wrote that she filled her journal with anger, but leaving it at that would be doing Fumi a disservice. Later on, in the final pages she had the strength to pen, she left that hate behind. Instead, she wrote about her dreams for the future. How she hoped to recover, so she could marry a childhood sweetheart and raise a family.

Maybe, just like Fumi, the people here have decided to look towards the future, instead of staying mired in the past. Whatever the reason, I can only be thankful for people like Fumi, or Mr. Sonoda, or my host family, the Ogawas. People who are willing to forgive, instead of holding onto a grudge. Truly, the world is a better place for the people of Nagasaki.

If you come to Japan, I recommend a visit to Nagasaki, and the Peace Museum. Though I’ve been there before, I always feel like I learned something new, like, I have grown as a person. Oh, it’s sad, it’s sad. To quote a memetic American expression: “I cry every time.”

But even still, I’m happy that I went.