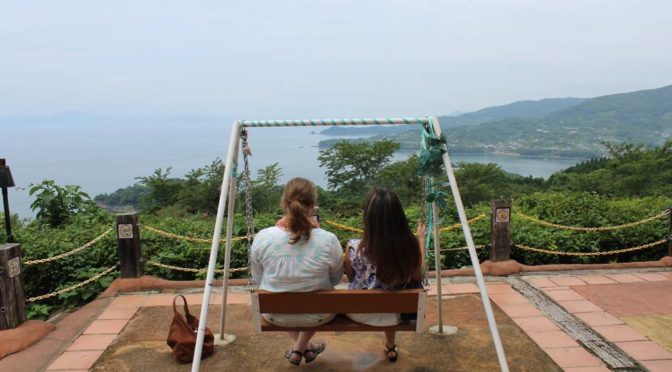 On Friday we visited Minamata Eco town and learned about the Minamata disease. Since Minamata is approximately 90 km from our home stay city, Kumamoto, it was a day full of travelling and beautiful countryside viewed from the bus windows. We also had a guest student in our group, as my host sister joined us for the visit.

Our first stop at the Minamata Eco Town was enlightening in many ways. In Japan, like in Finland, people are very careful about recycling, but even though I recycle myself, I have never given much thought to how the lifecycles of the recycled things continue. At Minamata we learned about recycling and saw how glass bottles are recycled and reused in Japan, and I have to say that there were many glass bottles! All the workers seemed very passionate about their job, which I have to give them credit for, especially since some of the job includes checking an endless line of reusable glass bottles for cracks. Later we could also buy different glass products made out of used glass bottles by the manager, Mr. Tanaka. We also learned that it takes about 20 wine bottles to make a square meter of asphalt, which is an ingenious way of reusing glass!

The second activity for the day was Minamata Disease Municipal Museum. Even after a small briefing we had already had about Minamata disease, there was still lots of new information at the museum. We also had the opportunity to listen to the story of a Minamata disease survivor, Mr. Nagamoto. He was born with the disease, and his story was very touching. Firsthand experience and the feelings he could describe made the whole thing feel much more real: after all, although the pollution of Minamata took place in the 60’s it was not until 2004 that the prefecture was sentenced responsible for the disease. Although Mr. Nagamoto has suffered from the disease his whole life and will continue to do so as long as he lives, he talked about the things matter-of-factly without bitterness and smiled often, which is, I think, something admirable. The disease itself and the suffering it caused for Minamata citizens, whether they were victims or not, was a rather difficult subject, but the beautiful view from the museums roof and the positive attitude of the survivor helped to lighten the mood a bit.

All in all, the day’s activities were very informative and interesting. Protecting nature and recycling seems now even more important to me than before. It is terrifying what we can do to the environment because of ignorance or indifference, and the extent of catastrophes such as Minamata is unbelievably large. I hope that the highly ecological ways of Minamata will spread so that we can prevent things like this from happening again.