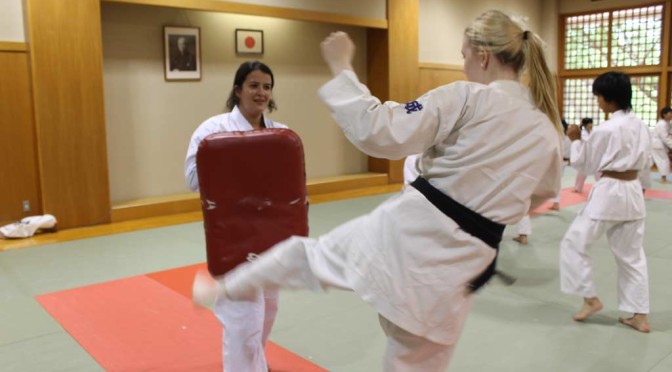 So today it was time for a Japanese Culture Experience… Specifically for me, Marie and Carla: karate! A Japanese martial arts sport I once practiced when I was very young.

One of the kind members of the LOC (Local Organizing Committee) drove us to a sports centre where we would soon meet our sensei. We changed into the thick white cotton uniforms that were given to us, and we even got to wear a black belt! (The white belts were too small… I guess kids start young in Japan!) We entered the traditional-looking training room and were surprised to find a group of about 20 children staring at us with big eyes.

After introductions by the sensei, and paying respect by bowing, we started the warm-up. Many punches and kicks in perfectly formed lines later, it was time for stretching. We teamed up in pairs of two, and each one of us joined one of the kids to help eachother stretch further. We were surprised to see how flexible they were!

At one point, when stretching the legs outwards while sitting crossed-legged, the sensei wanted us to stand on the knees of the children to stretch them further! Doom had come to the innocent children who had teamed up with us…or at least we thought so. After asking “Daijoubu?? Hontouni daijoubu?” many times, my tiny partner didn’t even flinch when I stood on her knees. Better yet, she was laughing at Carla’s shocked face!

After the stretching our bodies were ready. The children got out punching-pillows and the training started. Front and sidekicks were the main things we practiced, and I have to say it was rather fun to do again.

After a quick sip of sportsdrink, it was time for the kata; a fixed order of several defensive techniques and attacks. We would have to learn this kata by heart in only half an hour, as we were going to perform this at the arigatou event. Time went by quickly, and we were able to remember most of the kata.

Last but not least, we once again bowed to the front of the room twice to pay respect to both the teacher and the ‘karate environment’ and said our goodbye’s to the children and the sensei. We were so lucky to have them all joining us the next evening at the arigatou event.

It was a great experience. I really liked how respectful everyone was to each other and helped each other improve. Personally it was also really fun to re-experience karate. I kind of miss it now. Who knows, I might try it again once I’m back in the Netherlands!