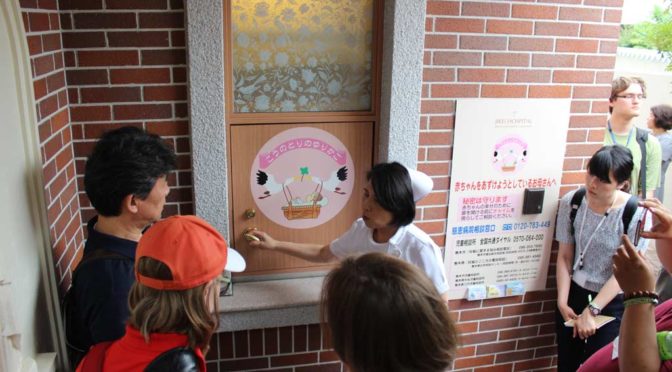 So today we visited the Jikei hospital in Kumamoto, where the only baby hatch in Japan is installed. A baby hatch is a small door in the hospital wall where parents who are unable to take care of their baby may anonymously leave their baby. Japan is still a country in which honor and family names matter a lot so sadly throughout history a lot of unwanted babies have been left in the wilderness. However, since Dr. Hasuda installed the hatch ten years ago hundreds of babies have been saved.

Our day started by watching a report from NKH World in the morning at the YMCA, our base of operation in Kumamoto. Even though the English dubbing of the Japanese was at some points quite questionable, everyone seemed intrigued. After the video followed a discussion. Some differing voices was raised, as of how about the children’s right to know their biological heritage, how is it even is possible to reconnect with the parent with the child and whether that would impact the anonymity of the parent. However, between talks about electrical gizmos and having the hospital acting as an information bank, we all seemed to agree that however sad it is that the need for the hatch exists, it is better that the hatch is there than not having it at all.

Later that day when we finally got to meet the doctor himself and saw the hatch, it all became very real and I started to think about all the lives saved by the door. Sadly though, it is the only hatch available in Japan so a lot of already exhausted people are forced to travel from as long away as Hokkaido to Kumamoto or choose a more tragic alternative. The reason we were given for the concept not spreading wider in Japan is that among other things, people in powerful positions believe that it would cause an increased number of abandoned children. But to me they seem quite misinformed since the statistics seems to suggest that there is no such correlation. And this is a topic where human life is at stake.

However, unrelated to the hospital visit, when we returned to the YMCA – where we started the day – we played both Ninja and Footzies. Ninja is a classic among WCI members but if you have not heard about Footzies or the foot game, just imagine an angry invisible cat with laser shooting eyes that just can’t avoid jumping between peoples feet. I think that would give you a clear picture of how it is played.