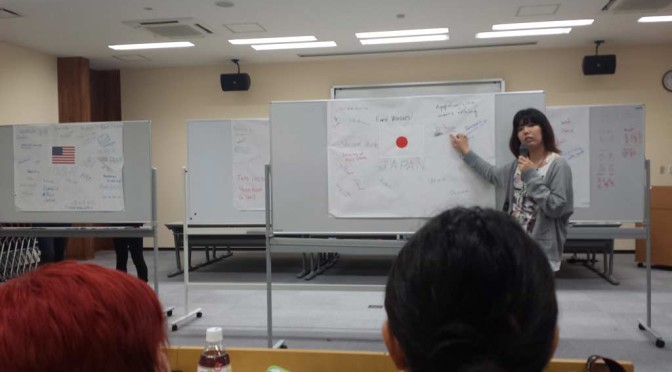 Today we mixed ourselves with the students of Kumamoto Prefectural University. As most of them were English majors there were fewer struggles communicating than most World Campus Japan participants had on the average day in Japan.

When we arrived in the morning the students first welcomed us warmheartedly and then introduced themselves shortly. Hereafter also we foreigners introduced ourselves in short. The Japanese students then invited us to the front for a round of speed dating. All of us got about 30 seconds to a minute each to get to know the person opposing ourselves, after which we switched to another person.

The morning activities they had planned for us consisted of discussions about various topics. All of us being from different countries made the discussions a lot more interesting and everyone’s opinions varied greatly, making it into a wonderful learning environment about each other and each other’s culture.

In the afternoon we first ate lunch with all of us and then we had a surprise visit to the University of the one and only Kumamon, who performed some dances in the main cafeteria. Some of us had never seen Kumamon before and were either staring at his dances with admiration or with dullness. After one of us managed to sneakily hug Kumamon and take a picture, we all headed for the gym to fight out a dodgeball match! Because we were all pretty big fellows who played this game very seriously it was more like a dodgeball war. Especially when the teacher decided we should play with 3 balls at the same time… it became true ‘dodge’ ball! As a final match and as last event of the day we played World Campus vs. Kumamoto prefectural university and just guess who won!