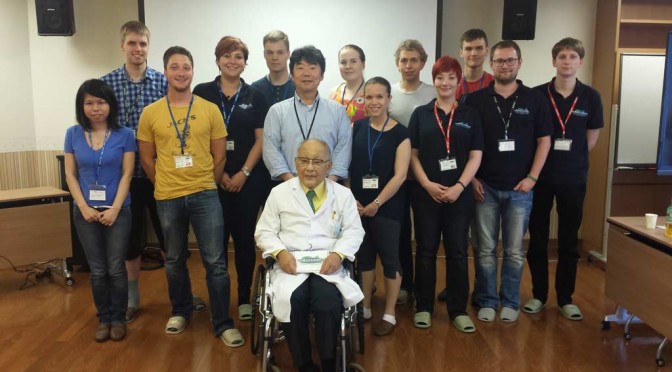 Today we went to the Jikei hospital where they have a so-called ‘baby hatch’, or more formally ‘the stork’s cradle’. It is a place where parents who are unable to care for their children can drop off the baby anonymously.

Before we went to the hospital itself, we had s meeting with a nurse whom had worked with the cradle for several years. She told us many emotional stories about women who couldn’t even tell their parents that they were pregnant, and had come to the stork’s cradle. I was quite surprised that the social stigma around pregnancy under the ‘wrong’ circumstances was still so powerful, and even more shocked and surprised when we were told that before the cradle was started, there had even been a problem with babies being abandoned and found dead.

When we came to the hospital, we were overwhelmed by all the cameras and journalists who were there for reporting on our visit. Apparently all the local TV stations, and at least one national newspaper, were there to cover our visit. We went to have a quick look at the hatch itself, and then we went inside to talk with one of the founders of the cradle.

It was very interesting to hear what he had to say about the effect that the cradle has had, but all the cameras made it somewhat uncomfortable. Afterwards, some of us went to take a closer look at the hatch, and even got to look inside. Inside was a letter with information for the child’s parents, and I was relieved to see that it is impossible to leave a baby without taking the letter.