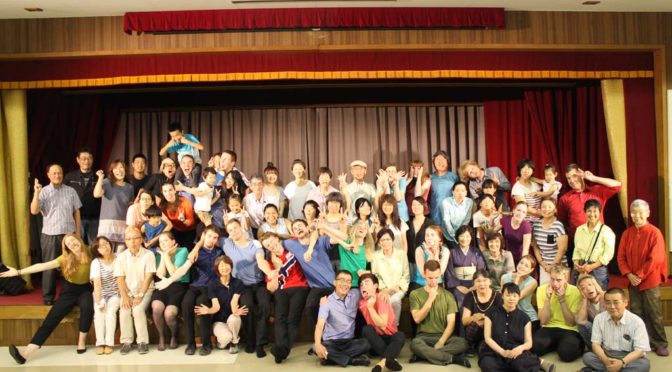 Today the WCI troop visited a Home for the Elderly in the morning and performed the Arigatou Event in the evening. First off was coordination as per the usual. Today we didn’t need to do very much organization since it was the second Arigatou Event and the Elderly weren’t demanding. After that we traveled to our first destination by bus. After we arrived we introduced ourselves to the old people and received a short explanation on what that facilities purpose was and such like. After the Introductions we were each seated next to a random old person. Followed by a game, in this game we received multiple choice questions on random topics such as “Where in Japan is the castle on this picture” or “How many Lakes are there in Finland”. In this game it basically ended up with my partner answering the questions on Japan and me the other questions. Together we scored 9/10, we did well. We talked as much as we could but sadly since we were limited to Japanese only the conversations were short, but very fun since it was funny trying to communicate and then having some success. I was surprised when one of the other participants told us about how his partner asked him the same questions a few times. I knew these things happen with old people, but having it really happen was quite a shock none the less. Just as we were leaving 2 of the elderly gave each of us a souvenir. One was an origami chain thing, and the other was a ball with a strange pattern woven into it. According to the explanation it takes 2 days to make one of these gifts. A short round of math would reveal that they each spent 2 and a half months making these gifts. Truly heartwarming. And when we were leaving they followed us partway out of the building, some in tears. This event was very short, not even half a day, but even an idiot could see that our visit was a moment that those cute elderly treasured dearly. And so even tho the game we played was a simple one, the time we spent was but a few hours and we went to the building for “yet another” round of meeting new people, the sincerity of the elderly touched all of our hearts and many of us left in Tears (of joy). A truly unforgettable experience.

After this we headed back to the Community Center to eat lunch which was prepared by the LOC, followed by preparations for the Arigatou Event. Both of these proceeded normally. Lunch was yet another Japanese something or other and the preparations were basically just practicing the dances and singing. The actual Arigatou Event itself however was a lot of fun. Personally I like to refer to it as a goodbye event, rather than a thank you event. Reason behind that is because it’s a lot of fun and it does the job of marking the end of the homestay very well. Today everything went very well. There were a few mistakes, however when my host-family and I were looking at the videos after the event the mistakes were actually a good thing since it gave us a good thing to laugh about.

Today was a very special day. Special because it was a very emotional day, this for multiple reasons, mainly the looks on the host-families faces and those of the old people. What was just another day in Japan for us was the highlight of the year to many of the people involved today. Being able to make people that happy truly moved many hearts in our group today. A signature on a “Thank you card” will never again be rushed by me. I feel very embarrassed when I think back to signing those 120 cards and thinking “what a pain” and rushing them. Today when looking around that facility I found a ball with the signatures of people from WCI on an obviously very important shelf.

Lastly I’d like to once again thank the host-families for their generosity for housing us. This Wonderful program can only exist thanks to you.