Last Monday morning’s scheduled activity was very interesting. Really. The presentations were a little long and very detailed, but thez gsve me a lot to think about concerning how much planning goes into a city (an interest of mine that has nothing to do with either my major or the job I sm am aiming for).

In the afternoon, my normal shyness-induced awkwardness was amplified by the addition of a new component to the game JanKenPon (a Japanese version of Rock Paper Scissors) where the ‘winner’ of the round points at their opponent’s face, says a phrase, and points their finger in one direction of four (up, down, left, or right) on the last syllable of the phrase. Also on the the last syllable of the phrase, the ‘losing’ opponent looks in one of the four directions, and prevents the ‘winning’ opponent from truly winning by not looking in the direction that they point in; if the ‘winner’ doees not straight out win (i.e. their opponent looks in a different direction), the dueling pair start all over again with JanKenPon until someone wins. Confusing, right? Now try learning that on the fly when neither party speaks the other’s language very well.

After this amusing activity, we went upstsairs to make Ikinari Dango and were able to see everyone in the aprons they had borrowed from their host families; some of the combinations of World Campus – Japan Participant and host family apron had the occational incongruous and hilarious results: Actually, Ellis had hinted about the design of his host mom’s apron while we were visiting Kumamoto’s Tourism Department that morning which lead me to guess that it was pink and frilly to which he answered with an affirmative. But, seriously Ellis, an apron that has tomatoes on the pockets is not pink! A combination of the following pictures is more what I meant when I said pink and frilly! Funny aprons aside, we had an interesting experience making Ikinari Dango (in a ‘I have no idea what the heck I am doing, but let’s see how this turns out’ sense of the word “interesting”).

The YMCA students were really good at including us in the process of making the dough (very sticky stuff), putting the anko on the sweet potato slices, and wrapping the potato & anko combo in a thin layer of dough. Afterwards, we ate a lot of watermelon while the dango were being steamed, and then we ate the dango shile they were still piping hot. (‘Su-i-ka’ in Japanese means ‘watermelon’, though the ‘su-i’ is not the same as ‘su-i’ which is one of the pronunciations for the kanji which means ‘water’.)

Finally, as we were saying good-bye to the students, I randomly got AKB48’s song “Koisuru Fortune Cookie” stuck in my head. For those who don’t know: “Koisuru Fortune Cookie” is the first song of the Japanese Medley which we participants of World Campus International perform at each Arigato Event. As a result, I started dancing a little of the choreography, someone asked me what I was doing, I answered with a Thinking that We Should Perform the Japanese Medley, and the whole thing snowballed until about half of us were performing with music and a fair number of the YMCA students were recording us. This impromptu performance, I think, was the highlight: a great ending to an already exciting day. Today we left suita station by bus to go to OYC, the Oriental Yeast Company. The OYC was Japan’s first baker’s yeast manufacturer (since 1929) and thus one of the trendsetters that made bread as popular as it is today in Japan. After a lengthy and informative PowerPoint on the fermentation of yeast we went on a tour of the Osaka Branch. On this tour we got to see a bit of the manufacturing process, mainly the packaging, and also saw a shrine where one can pray for good business. We did so maybe one of us will become a business tycoon. After the tour we had lunch, which consisted of bread – made with their yeast, of course – and some delicious Curry Rice.

After the factory we went to Kansai University, which had the grand campus. Of course we didnt see it all but the map was indication enough. They gave us information about their exchange program as well as two student-made presentations; one on jokes and the other on Japanese fashion, and wow are some styles unique and flamboyant. After having a discussion about the different styles present in our countries we went to see a Kendo presentation.

It was given by an Australian who’d been doing it 20+ years and was 7th Dan. He told us about Kendo’s history and how it was more than just a sport but also a way of life. The two girls, both 3rd Dan, faced each other and their sensei, giving us a taste of Kendo. Their Kiai was more high pitched than id expected and it painted a rather interesting image, especially because of the sensei’s baritone. In any, case it was fun to see but probably not for me. This was the last activity of the day and, in my opinion, a good ending to our 5th day here in Osaka. 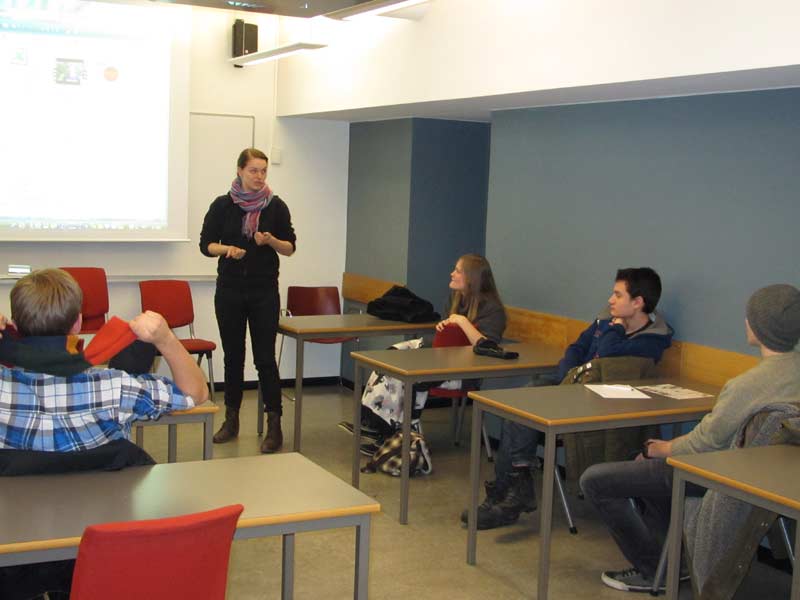 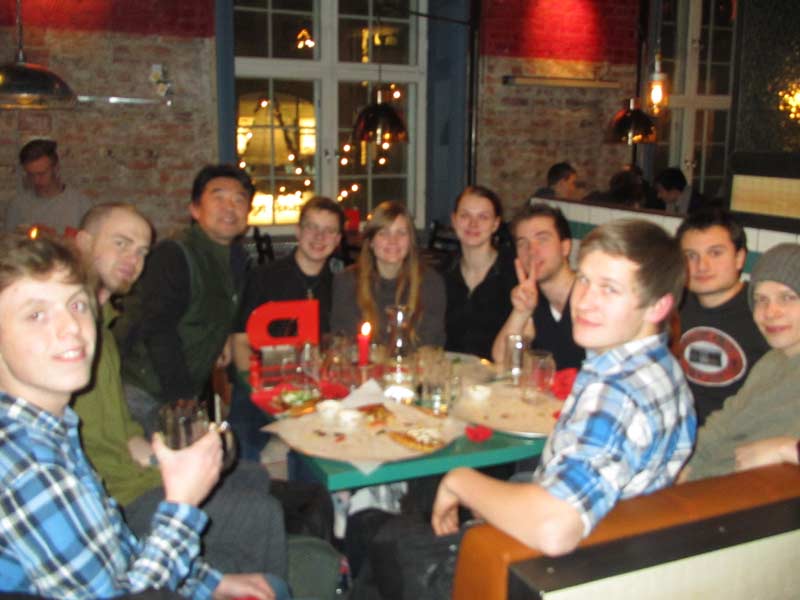 World Campus – Japan alumni, Daniel Nystadnes, Maria Sørlid and Alexandra Kristinnsdottir joined Hiro Nishimura to present 2014 World Campus – Japan program at the University of Oslo in Norway. After the presentation, more alumni joined in the informal gathering with the students who are interested in the program. 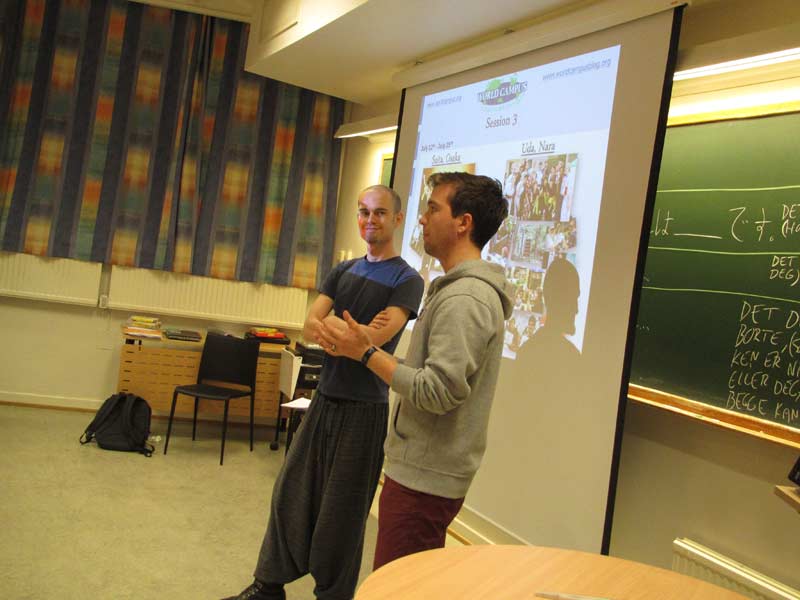 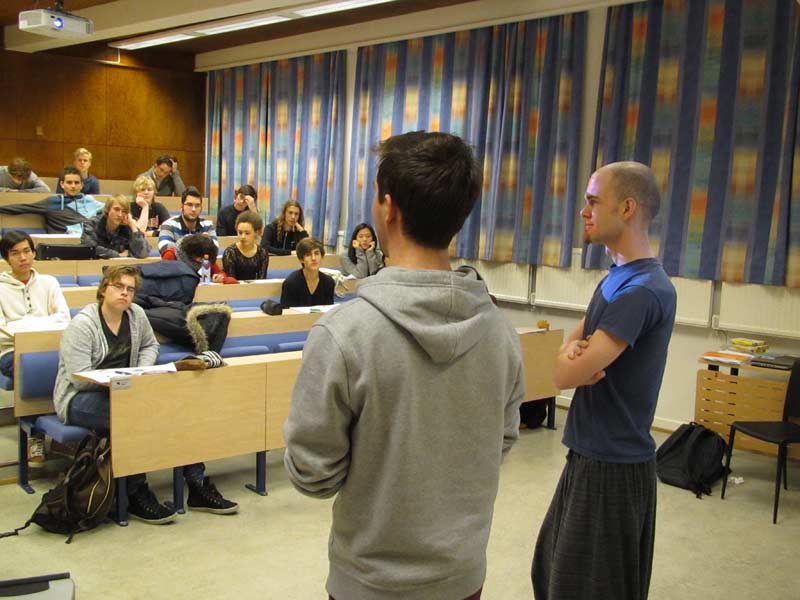 World Campus – Japan Alumni, Henning Rodtwitt and Marius Haugen joined Hiro Nishimura in the 2014 World Campus – Japan presentations at Oslo Handelsgymnasium. They shared their experiences with World Campus program, especially Marius as a student in the school spoke about the large benefits for the students who are studying Japanese and/or culture.