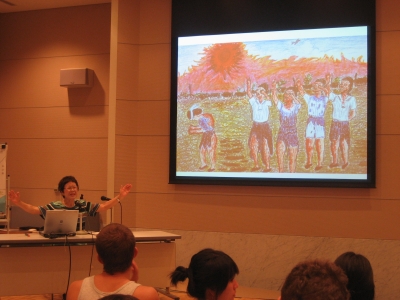 At first sight, Matsubara-san seemed no different from any other mid-aged or elderly woman. Perhaps one distinguishing factor was a sense of strong will power that seeped out through her rather heavy make-up and vigorous eyes with an uncanny sense of determination about them.

They say human beings have hundreds of facial muscles, but the facial expressions she showed during the forty-five minute speech seemed almost overly intense and vivid. She later mentioned that she was one among numerous A-bomb survivors that underwent a multitude of surgeries to hide away the scars. Whether that was one cause of those eerie expressions, I will never know.

The English that came out of her mouth did not amaze me (though it is quite unusual for Japanese women of her age) as much as the will power that produced it. Her graphic, eidetic drawings also clearly indicated her determination to share and pass on the utter horrors of the atomic bomb. In my eyes, this embodied the essence of art: a direct outlet for her emotions and a tool for communicating events and emotions that cannot be expressed in words.

We were very fortunate to be able to hear the experience of an A-bomb survivor in person, and I greatly appreciate Matsubara-san’s willingness to share an uneasy story to tell. At the same tie, Matsubara-san herself expressed a deep sense of gratitude toward one American woman in particular for her compassionate generosity in post-war Japan, when even the Japanese would step away from “contaminated” individuals like herself. In my understanding, such acts of kindness was what enabled Matsubara-san to gradually learn to accept and forgive what had been done to her life, and to devote herself to passing on the giving spirit to us.

Only later did I notice the remarkable connection of the lesson I learnt from studying the effects of the A-bomb in Hiroshima to our World Campus International Arigato Evento song. Yes indeed, it starts with “one to one”, and “everyone can touch someone”. Thanks to that kind American lady, I gained a valuable life-lesson from Matsubara-san. But this could go on infinitely… who shall I thank, that motivated the American lady’s act of kindness?