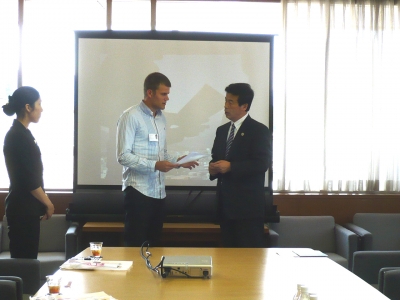 The mission of World Campus International is in many aspects to interact with Japanese communities in order to obtain a better understanding of Japanese culture, norms and values. And my first interaction with a Japanese community really made it clear to me about how excited the people are in sharing their traditions, working methods, and ways of thinking with us. They were also really eager to hear about our preconceptions of Japan.

On our first courtesy visit, we went to visit the mayor of Ueda City. Yuki, a staff member, acted as the translator, as Japanese was the spoken language during the visit. The tone was friendly and polite but also formal. The mayor and his staff had prepared a nice PowerPoint introduction, telling us some facts about Ueda City; geographic placement, attractions, and number of inhabitants. With 160.000 residents, Ueda City is the third largest city in Nagano and it is known for combining industry, academics, and technology in a harmonious matter. Furthermore, this city has many sister towns around the world including Broomfield, Colorado and Davos Town in Switzerland.

I really noticed how the entire city takes pride in their nature; especially their minerals and fireflies. Regarding the fireflies, the locals actually have a yearly festival, showing their attraction to the rest of the country. In fact, the mayor invited us to partake in the upcoming ceremony.

Finally, we received memorial gifts from the mayor, which included an elegant cloth towel. We also gave the mayor letters written by politicians and businessmen from our home countries. One of the most neglected parts of training for any group project might the most important. The ability to work and cooperate as a team is fundamental for success. In as much, the first couple of days of staff training focused on building internal team bonds. Of course, trust and camaraderie takes time but all of the staff is eager to learn and work with each other.

Currently, we are staying in a house in the city of Ueda, Nagano. Living in such close quarters is a little cramped sometimes but it also promotes if not forces intimacy. Nothing speaks of closeness quite like being awakened in the middle of the night by the snores of your fellow staff members. Trust must also be high before you should ask someone completely inept to cut your hair. Although I do not like to brag, I must say, I did an excellent job on Henning’s hair (Production Team Assistant). His hair is mostly even and he can still go outside, albeit wearing a baseball cap.

Naturally all teams have certain items that symbolize their membership and for this World Campus — Japan squad it is our matching cups and chopsticks. I am certain we will all treasure these as they represent our shared learning experience in this pleasant house. Plus they are happy, fun, and colorful which I believe indicative of the upcoming tour! Honestly I’m not a person who is crazy about traveling around the world. But Japan is a special place I’ve been dreaming about for a long time. I am always asked what the main reason is for going to Japan and why I am so interested in this country.

I guess it’s probably because I was affected by “Animation” since I was a little kid. From then on I started to be interested in Japanese culture and its language. I never thought I could have my dream come true before I joined the World Campus International Japan program. Basically it is quite easy to get a couple of days travel to the place you are interested in, but when I joined this program I got something different. I do appreciate WCI makes this special tour for people. I got a great chance to learn not only Japanese culture but also sharing things and ideas with people from all over the world.

Summer is not my favorite season; it rains all the time and is severely humid with few fine days. We may have weather challenges during event or activity arrangements. But I’m coming back for this summer program to be part of an excellent team there. They are passionate, enthusiastic and creative. I do believe we can conquer any problems and make this program successful.

See you there guys! I don’t have the appropriate words to express how thrilled and honored I am to be a member of the World Campus International 2008 Summer Tour! I am immensely grateful for the opportunity to experience Japan and its amazing culture for the the first time, as well as have the chance to get to know each and every one of the participants and community members involved with this WCI tour.

This summer I have been give the opportunity to combine two of my greatest passions: travel and education. Being a member of organizations such as Up with People, Sister Cities International and WCI, has opened many doors which have allowed me to travel the globe and experience a variety of cultures in unique and meaningful ways. Additionally, as the ESL coordinator for a high school here in Colorado, everyday I encounter the challenges and opportunities to OFFER my students the world. I get to be their teacher AND their pupil. I get to introduce them to the American life as well as share my Mexican culture and they in turn, teach us all in the class about their experiences, cultures and international backgrounds.

This will be a life-changing summer for every singe person involved in this great tour and I simply cannot wait to share this adventure with all of you! I am looking forward to meeting you all very soon! It’s summer vacation for me from college life in Vermont, USA. I’m home in Tokyo, taking this opportunity to spend time with my much-missed friends and family, and to savor all those things I missed about Japan.

Even though a native, I find that learning about my culture is an endless and evermore exciting process of new discoveries. It’s been great, and as my joy builds up, so does my excitement for sharing this experience.

You might have guessed already at my fascination for different cultures. I love immersing myself in their colors and viewing life through their hues. Even a day with people I’ve known for years can bring in a fresh perspective. Living with host families and touring with each of you will surely be an enlightening summer!

I can’t wait for our tour together, and I look forward to meeting each of you. Have a safe trip!