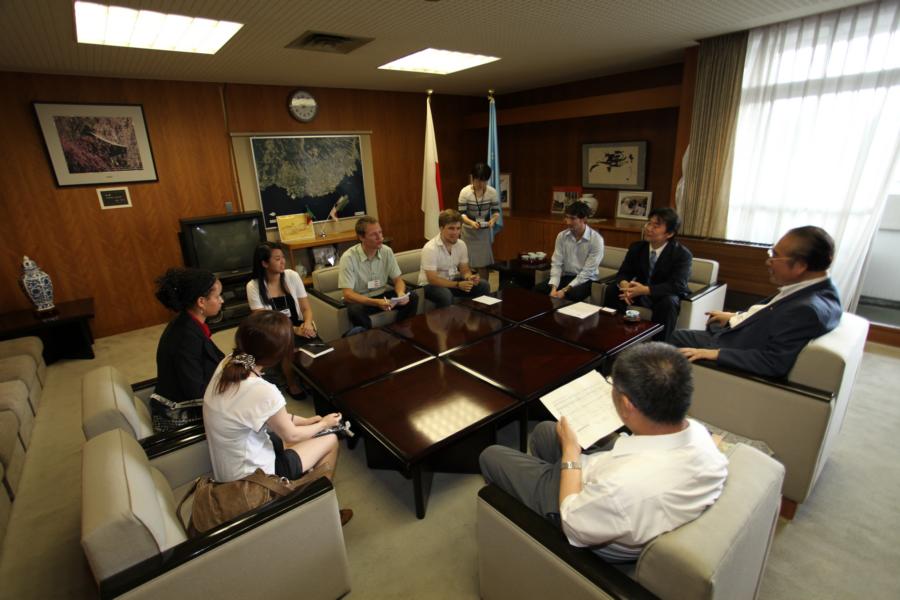 I am from New York and never have met or seen any of the mayors in my city. They are almost untouchable to me and I only get to see and hear about them on television.

Today I was lucky enough to be able to meet and talk to the mayor of Omura, Nagasaki. His name is Takashi Matsumoto. As the group and I waited in the lobby to see him I was quite nervous because I thought he would be a very serious person.

To my surprise he was really friendly. Mayor Matsumoto was very curious about each of our countries. He wanted to know what we were proud of when it came to our home towns. To answer his question I told him about the diversity of people that can be found in New York. There is an opportunity to experience and learn about every culture in New York.

The superintendant of the elementary schools was also participating in our discussion. He told us how in the elementary schools the food for lunch gets delivered to the schools and is prepared for the students at the school. Most of our countries have similar systems except for Austria. David, who is a student from Austria told us that the elementary children have a 2 hour lunch. During that time they go home and eat lunch there. Then they return to school when they are finished. The mayor liked this idea for lunch.

Mayor Matsumoto also told us some history about Nagasaki, like how it was the only city open to foreigners during Japan’s isolation period. The time with him ended when the mayor gave us his business card. I feel very honored that I got to meet the Mayor of Omura city.