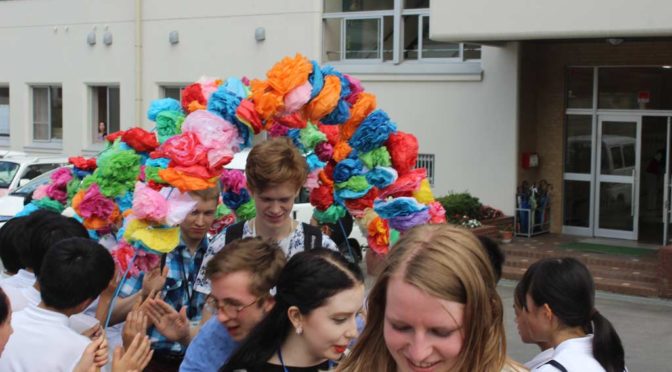 Yesterday we had a fun day of Zen meditation and some interesting ninja training. One of the most difficult activities was the crossing of the Akame river, using only a small floating device, which I completely failed at. Returning home I was looking forward to a much appreciated rest.

The house of my host family, the Okuda family, is amazing. It is a really relaxing environment with an absolutely wonderful forest view accompanied with the whining of the nearby cicadas. The house itself is made by my host father himself using only natural resources that can be found around the building. It is such an amazing and relaxing environment that it makes me want to stay a lot longer than a week.

However, today we had two activities planned; visiting Murou elementary school, and Uda city hall. Before meeting with the schoolkids we were invited to their morning meeting in the gymnasium, so that we could formally introduce ourselves. We were also introduced to some Chinese school kids who also were invited that day. We showed them our Japan medley dances too. After that we were divided into groups, meeting four different grades. My group was going to meet the third graders.

When we met the kids in their classroom they were really excited to see us. They all welcomed us with a song, and then we played a game. The World Campus Japan members were asked some questions and the kids had to guess the right answer. They asked me what my favourite colour was, but none of them guessed the right answer, which is blue if you were wondering. Then we ate lunch with the kids in the classroom and we got some more time to interact with them. Kana-chan absolutely loves playing the piano and Ibuki-kun is absolutely crazy about labels and ketchup cups.

After saying our goodbyes we went by train to Uda city hall and met up with the members of the tourist committee. They told us what Uda’s must see spots and attractions are. Because we have not been here long we did not yet really know a lot about the city and its surroundings but I have the impression that Uda is a wonderful place witch does not yet know the mass tourism that places like Kyoto and Nara knows, which means that it is a place where you can enjoy the many temples and shrines, without feeling swarmed, but able to visit them in a peaceful and relaxing way.

We sat together with the committee members to talk about the possible ways to attract more foreign tourist; as of now Uda mainly attracts Japanese tourists and only a handful of foreign tourists. This led to some interesting discussions about the future paths Uda’s tourism can take. I hope that they can take some of our ideas into consideration.

This afternoon did convince me that Uda is certainly a place were I want to return to, hopefully in the near future.

Then we returned home to our host families and at night I had a lovely dinner with my host mum, Hinomi-san and the kids, Akiha-chan and Kiharu-chan. In the beginning they were incredibly shy but after a few games they opened up. We probably were too busy yesterday so after watching sumo, first time for me, they went to bed. I spent the rest of the night with my host mum and talked to her some more until my host father came home. After some nice cold beer and some more chatting, I went to bed.

I’m looking forward to the rest of the weeks activities.