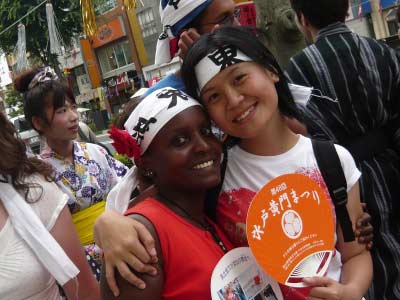 WCI bridges people from around the globe to become part of the world community. Various activities were offered as part of the program curriculum. From living with host families, getting to know Japanese cultures to communicating with various people from other parts of the world. With that, people’s views change!

Over all, this program is not a normal program because a sense of becoming a family happened for most of us. It started from our first meeting at the Narita airport, where almost all members came from all over the world. When we introduced ourselves to each other, we all made an effort to not let language and other differences become an obstacle. In the first several days of the program, we stayed together in an accommodation, where we got to know each other before eventually meeting local Japanese community members.

During our first city in Ueda, it initially felt strange to live with families as foreigners. But in the long run we felt very lucky to be able to experience the direct interaction and welcoming spirit by the locals. During the theme activities of Food and Society, we were taught about how Japan processes the land and their resources to produce food. Other memorable activities included the Firefly Festival, interacting with pupils from a junior high school, where we played, joked and studied together and also the courtesy call to the mayor’s office. And definitely, the “Arigato Evento” could not be forgotten.

The second city, Tama, was the last city for the first session. Tama was the “Hello Kitty city”, with the presence of the Sanrio Puroland amusement park. There were plenty of contrasts between Ueda and Tama. Tama is part of the greater Tokyo metropolitan with various modern and sophisticated facilities. This city theme was Population and Society. We were taught about the development of this city in the past 60 years. Metropolitan tours were very impressive because we got to know so much about the younger generation and how it contrasts with the older generations with differences but also with respect. Host family day was also very special for us, where we experienced things all day long with our host families. I even got to visit Tokyo Disneyland, the place of my dream! We also met Kyoko Nathalia Takahashi, she was a person of Mexican-Japanese descent and it was truly wonderful to be able to meet her.

Out of all of the participants only, I, Lita and Jackie were to only stay for the first session. We all wanted to join the second session and stay with our newly met friends until the program ended. The idea of leaving was really very sad and touching.

The third city, Toride shi, had a Community Revitalization theme. It was the beginning of the second session, where we met the 4 new members before Lita and I had to leave. Truly a very pleasant matter! My short stay in Toride shi taught me a lot as well about Japanese culture such as kite instruction, Koto (Japanese zither), Shakuchi, Karate, Bon dance, Takoage, and Turushi, as well as the production method of sake!

After returning to Indonesia for a short time, I was quite fortunate to have the opportunity to once again feel the fresh Japanese air, the beauty of city scenery and the height of the skyscraper buildings. Yes, I once again returned to Japan to join my friends in the second session! It was a surprise to the group and I really startled everyone! Possibly I was mad, I did not have common sense, but I dared to come back and was so happy! The fourth city, Mito shi, is the city proud to be the home of the sticky, protein filled Japanese natto and also gave WCI insights about nuclear energy during a power plant visit as well about an international business at the Canon Company. Mito, was also the city that had the nearby beauty of the sea. We experienced the Hanabi festival, the fireworks festival to celebrate the summer season. Truly a beautiful experience!

Hiroshima was the last city in Summer’s 2008 trip to Japan. The city theme was Peace and Conflict. On August 6, 1945, this city had been attacked by an atomic bomb and was destroyed. However, with lots of support and hard work, now Hiroshima is now one of the biggest cities in Japan and is very much alive. And on August 6 each year, many Japanese people along with people from around the world recall the incident by holding a peace ceremony as well as a lantern festival in the spirit of remembrance and peace. Words could not describe the environment where everyone gathered with mutual promises to always maintain peace between individuals, families, ethnic groups and internationally.

The end started our separation and really inauguration ceremony to what is to come because we successfully undertook the WCI Summer 2008 program. There were so many feelings that spilled into one- happiness, sadness, relief, frustrations, love, and many others. WCI was not only a summer season program but became part of our family. The experience we lived was now a beautiful new community that was created by us together. Yes, we felt very sad because of being together for so many days but we had to go back to each of our homes and other realities. However one day we will definitely meet again as an intact family. Yes, we are already planning the reunion party!!!!