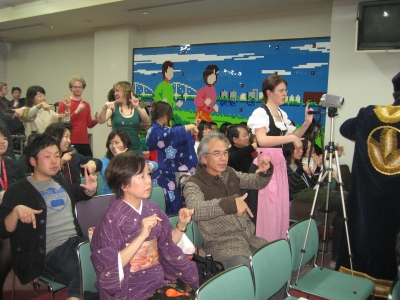 The participants spend a few minutes dancing and interacting with the audience before moving to the stage. Once there, the fun really begins, as each of the 14 countries represented offers a small cultural presentation, ranging from a slideshow, to live music, to a story written in Japanese. At the end of the presentations, a host family is called to the stage and asked a few questions about their stay with the World Campus — Japan participant.

In Kumamoto city, the Fukushima family was called to the stage, they happened to be my host family, and had wonderful things to say during their interview. Once they exited the stage, I read to them a small speech I prepared, in Japanese, thanking them for being such a welcoming and kind family.

An American Sign Language song continues the show, which is very popular with the crowd because it is a song most of the communities have heard. Next we have a Japanese Medley, which includes 5 very well known Japanese songs. We have soloists, dancing and a lot of interaction with the audience. After this portion, we teach the Japanese Sign Language that we perform to a famous Japanese pop song. This is also very appreciated by the audience, since they can learn authentic Japanese Sign Language from international people.

At the end of the Arigato Evento, the participants present all the national flags represented by the World Campus — Japan class of February – April 2008, and then thank the host families and local organizing community members for having us. It truly is a wonderful event that will stay in the minds of the people for a long time.