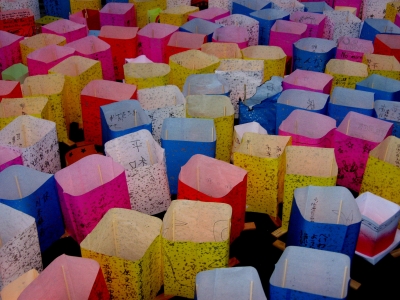 On August 6th, 2008, World Campus — Japan members along with people from all over the world and local community members participated in the Hiroshima Lantern Festival. The ritual was held on the evening of the anniversary of the world’s first atomic bombing. During this festival, blue, green, red, pink, and white cube-shaped lanterns float down the Motoyasugawa River in the twilight. Japanese Buddhists believe that every year the souls of the dead visit their descendants. When the dead return, the lanterns on the river light the path, guiding the spirits of the A-Bomb victims back to heaven.

Despite the large crowds of people, the memory of the solemn event that occurred 63 years ago was still so beautiful and serene.

With strong hopes for world peace, thousands of visitors sent messages to the dead. A few World Campus — Japan members, including me, David, Guang and Ilkka had the special opportunity to partake in the emotional ceremony. Each one of us thoughtfully wrote messages on the colorful pieces of rice paper wishing for world peace, love in the world, and for the spirits to rest in peace. Afterwards, we placed our messages on a wooden lantern frame, lit a candle inside the lantern and set it free downstream to aid the spirits in finding their way home. It was such a wonderful and touching experience to be surrounded by different people from all over the world, all with love and the desire for world peace in their hearts.