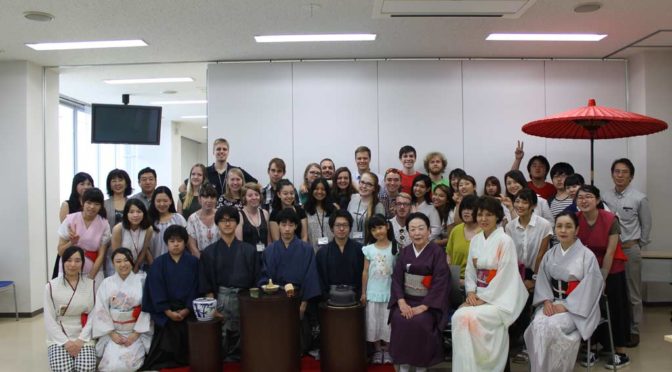 During this day we visited Chuo Gaikin university. Much like visiting the previous university it is the highlight for many as it is an experience to meet Japanese people of our age, with respectable English. First and foremost was the usual introductions between everyone in which we displayed our knowledge in either Japanese or English. Next was a short peek into a room in which traditional tea ceremonies take place, fitted in a small room with beautiful traditional walls and floors, as well as a fresh flower display. Following this was an actual tea ceremony we had in which the students of a tea club showed us each meticulous step, from how to make the tea to how to hold the bowl. The tea itself was delicious green tea, but slightly strong for my taste. It was interesting to see as these students, who could sit in silence to make tea, could then be seen a minute later cracking jokes, truly an embodiment to the politeness and respect within the Japanese culture. We were then asked to make green tea ourselves, a task which I of course royally failed at, never being able to have the sweet release of having the correct number of bubbles in my bowl.

After the tea ceremony was a chance to familiarise ourselves with the students better, in doing this, we played certain games and activities all involving communication and teamwork. The first of these was an adaption of Chinese Whispers but instead of words, it was a drawing. Now, this either resulted in a boat being a boat at the start and end or a boat being a castle at the end depending on the drawing skills at each interval. This was a fun activity with no confusion as everyone understands the language of art! Next was teaching each other Cups to the timings of “When I’m Gone”, again very simple to understand and entertaining. Finally and most interestingly was the activity involving the group siding yes or no to a proposed question, the most fascinating of which often involved an interpretation of our respective cultures and seeing how others reacted to this. Such as “Your country is the best in the world” or “Would you want to live in Japan?” After this and some exchange of social medias, we later said goodbye to one another and departed, having met some more relatable, wonderful people.

However the day did not end here, this day also happened to be the Abiko Hanabi Fireworks Festival, which of course many people within and outside our group swarmed to, myself included. This jubilant display and hysteria was wonderful to see as people swanned around in their kimonos and such, looking in awe in the dark sky above them, illuminated by the colours which then bounced off the river near.