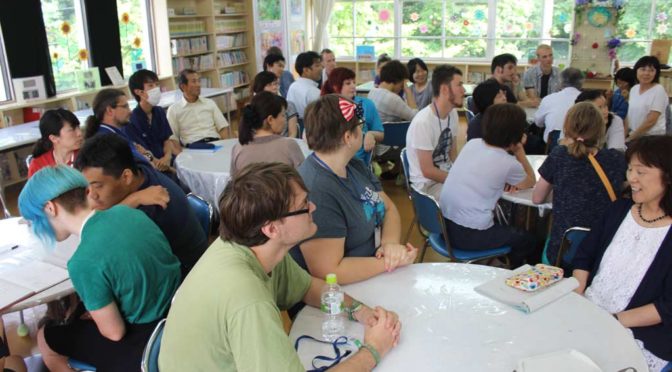 I honestly didn’t know what to expect when I went to the elementary school today. A little interaction, some fear probably is what I thought. I’m a whole different kind of person compared to a Japanese person so it’s hard to tell how Japanese kids will react. When we were sitting and the kids started to file in, I realized that our audience was a whole lot bigger than I had imagined. They also were all small and cute.

When we performed the Japan medley we usually perform at the Arigatou events, the kids reacted so strongly it was hard not to put my all into it. When we did the bread song, “alele”, Thomas had a fun time instructing the kids, and they matched his enthusiasm. It was fun to see their reactions and see them sing along with the songs we prepared. When we finished and we were left with just the 6th graders, it was fun to meet all of them and hear their reaction to our countries. The kids were a little shocked that American football stadiums are so big. One kid even knew the Golden Gate Bridge. It was kind of hard to talk fast about the country, sign our names and give them a sticker.

After we did that game with the 6th graders, we visited classes. It is so hard to say what class I liked most because all of the kids were so sweet and friendly. In the 1st grade class, we made paper snowflakes, which I was so relieved because I’m horrible at origami. The kids gave us their snowflakes as a present – so cute! However, as we went through 2nd, 3rd, 4th grade, I realized this was the case for all of these classes. They gave us little presents like pictures or origami animals. I had them all sign one so I could try to remember their adorable generosity in the future.

Sitting in the classes with four other people with you is much less intimidating. Plus, all the kids – plus the teachers – were super, super nice. I had lunch with Juuso (a WCI counselor) in 5th grade, and some of the girls were impressed with my multiple ear piercings and my heart tattoo. Even the 5th grade boys were willing to talk with me, which previously wasn’t really the case. It was nice to get to know them a little. Then, when we got to have free time with the kids outside or recess as we call it in the US, a lot of the kids wanted to play with us. One little 2nd grader grabbed my hand though, and led me around the large playground with a friend. They both chatted with me despite my broken Japanese, and gained other girls who joined the conversation of what Disney princess they liked and if I could understand Japanese or if they could understand English. When they said goodbye to me when the bell rang and ran towards the middle, they kept looking back so it made me want to run in with them and just stay. Maybe stay forever.

When I made it back to the library where we had breaks, we arranged ourselves to talk with the teachers. The teachers were all very nice and were super impressed with Juuso’s and Isak’s Japanese proficiency. It was a little funny because if Isak spoke Japanese, he translated what he just said into English for me. It was interesting to hear the discussion about diversity, English and bilingualism, how school systems work not only in Japan but also the U.S., Sweden and Finland, and learn a little more about the teachers who help mold those sweet kids into fully functioning members of society. Overall, it was a wonderful experience, and I was very tempted to volunteer as an ALT for free. I hope that everyone from WCI gets to experience this kind of school. 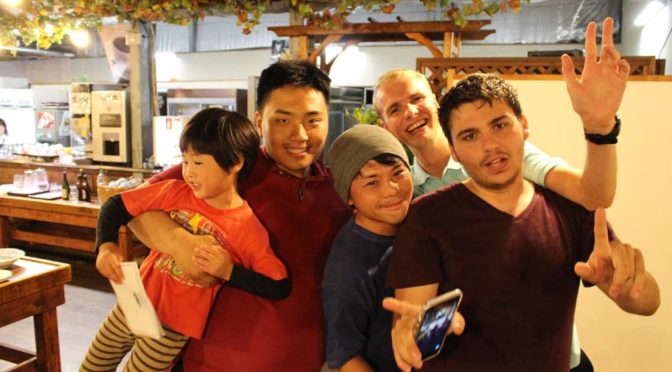 Today, was the day that the Arigato Event in Omura would take place in the evening. But before that, we visited Matsubara Elementary School during the day. After a short morning meeting at Kori Community Center, we moved to the elementary school. During our visit at the school, we were divided into groups of two, or three. I was in the same group as Juuso, and Nicole. The visit was divided into 5 sessions, 3 before lunch and 2 after.

Our first session was science class, with the fifth graders. The lesson today was about the anatomy of a fish. The second session was something called moral education with the sixth graders. This one was a pretty impressive lesson. In the lesson, they were teaching, and discussing lifestyles. The third session was math with the first graders. It was pretty funny, although the kids were pretty noisy.

After lunch, we had a playtime session with the kids. We did some clay figures with the kids we were playing with. This was the first time I saw Juuso’s impressive skills with clay. The next session was cleaning. A little bit of trivia: Japan doesn’t have janitors in the school’s, the kids are the ones cleaning it. What we did was some floor sweeping, moving around some stuff, and mopping. The last session was Life Environmental education. As I am writing this blogpost, I still have no clue what that subject was about. But the lesson was about wheel chairs, and how to operate it.

Many of us were impressed by the kids. They have a different level of concentration during classes, and to me, it seems like they have a lot more dedication in school. Even though it is only an elementary school. Some of the subjects and classes were really interesting too. Some of which I wish I had had in my elementary school as well.

We left the elementary school 15:30 for Shushu, the site for the Arigatou event of Oomura. Shushu is a small restaurant, a little way outside of Oomura city. We arrived there by bus. When we arrived at Shushu We quickly started the preparations for the Arigato event. Rehearsal started almost immediately after being briefed of the plans for the evening. I was particularly nervous, since I was one of the two participants to read a thank you letter, the other one being Charlotte. I am also one of the soloists. Although, I think most of us were nervous because of the performance.

The event was like a party with nice food and drinks. Our own performance in Oomura was a little bit shorter than what it would be in other cities. The rest of the entertainment during the event was provided by a local cover rock band. Our performance went smoothly. This was the first time we performed the whole Japan medley in front of a crowd. After seeing the slide show for Omura, it was time for reading the letters. I was having a hard time reading my letter though, since I wrote it in hiragana, and realized that it was very hard to read. Shoko had to help me reading the letter. I probably should have written it down in romaji instead. Charlottes letter reading went well. After that, we had a one last performance, which was the song “Minna ga minna eiyuu” (literal translation: Everyone is everyone’s hero). I was singing solo for the second verse. The song overall went well though, considering that we had very few opportunities to rehearse it.

The band was responsible for the rest of the party. It was really fun. The band was incredibly skillful. They performed top rock and pop hits of the 80s and 70s, like ToTo – Africa and Earth, Wind and Fire. We all had a good time the rest of the evening after taking the big group picture. There were many smiling faces and laughter. Oh, and also lots of photos!

Though our performance wasn’t perfect, it was a really memorable evening. I was very satisfied. The event ended around 10 o’clock. We were all very tired. But the whole evening was great fun. It was especially fun for many of us since this was the last day with our host families, so everyone was enjoying every last minute of it. I feel sad, but also exciting to know that we were leaving Omura for Kumamoto the next day. I think that everyone felt the same as me, that today was a fun and experience filled day that we would remember for a long time.