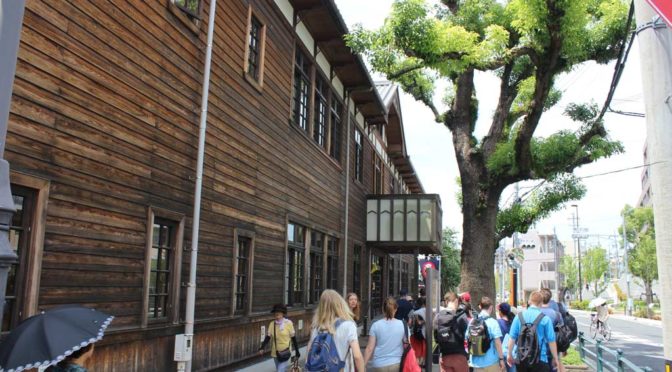 The first event of the day took place when we walked from the local community center to an old library. The library used to be a school, however as time passed, it slowly fell into disrepair until it was eventually abondoned, after which it was reconstructed into a library. Inside said library, there was an old classroom in which Hiro taught us some valuable life lessons.

Next, we went to visit a school (Senri Daini Elementary School) and interacted with the kids. The school was very nice and had an open atmosphere, and the kids were great. Later, we ate lunch with them, which was a chaotic yet unique experience.

After that, we thanked the school and its students, and went back to the community center to experience “Rakugo”. Rakugo is a performance in which the performer sits on a pillow on a small stage in seiza (Duke Kanada, who introduced us to the concept called it “punishment”, haha). During which, the performer is to depict a story in which two or more characters perform different things, followed up by a punch line at the end. The catch is, the performer may only use a fan, a small cloth, and various motions to depict said story. After listening to a few rakugo stories, we got to use templates to make our own which was a fantastic experience. Once every group had tried things out a bit, lots of us had a go on stage which was great because it put everybody into the spotlight and gave us a chance to express ourselves in new and creative ways. I myself took part in this, during which I did get a bit nervous as a result of being on stage but managed to pull through in the end.

I had a great day and would love to do something similar again, and will make sure to teach my family the way of rakugo when I return home!