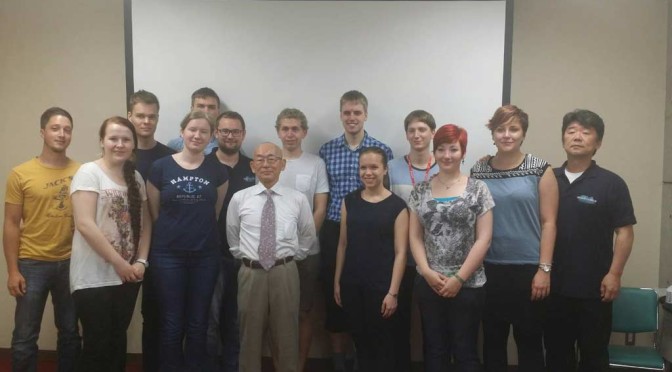 Today we got to meet an atomic bomb survivor.

Almost everyone (I hope) will, at some point, learn about the atomic bombs that were dropped on Hiroshima and Nagasaki through school/books/articles. At school you learn when it happened, what made the bomb so deadly, and what the death toll was, but today we got a small glimpse into what the bomb meant for the actual victims.

In the morning, into a classroom of sorts, in came a nice looking old man wearing a smile on his face. He introduced himself and then he turned on the projector and showed us pictures that he had painted based on what he remembers about the bomb.

He just stated facts, he didn’t need to resort to theatrics to pull at our heartstrings. His story of loss and hardship made me and several others cry during the presentation.

Eventhough his story was sad, it was a really valuable piece of history that not many get to hear. How his life changed instantly and how it still affects the survivors. I will be forever grateful to him for sharing his story with us.

Later on the same day, we visited the Nagasaki atomic bomb memorial museum. There were many actual artefacts that had been affected by the bomb such as glass bottles that had melted into clumps due to the sheer heat of the blast. The museum itself had also many interactive components which made exploring even more interesting.

I think that this all left an ever-lasting impression on me.