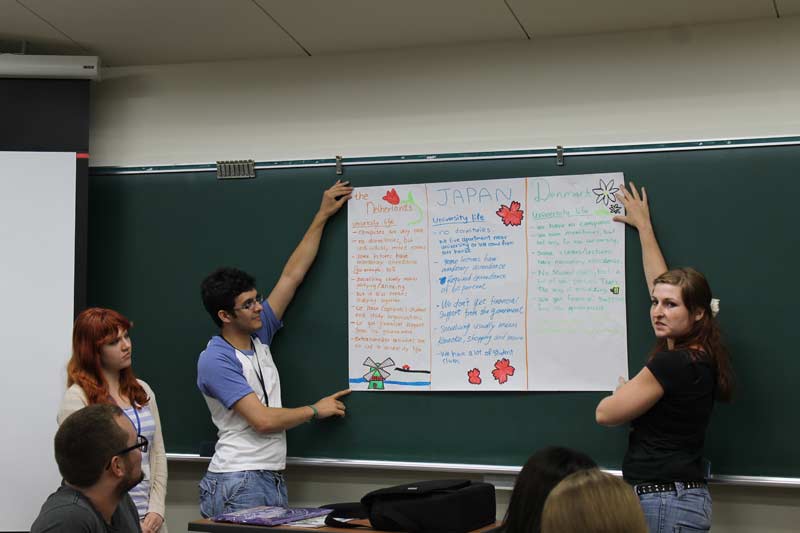 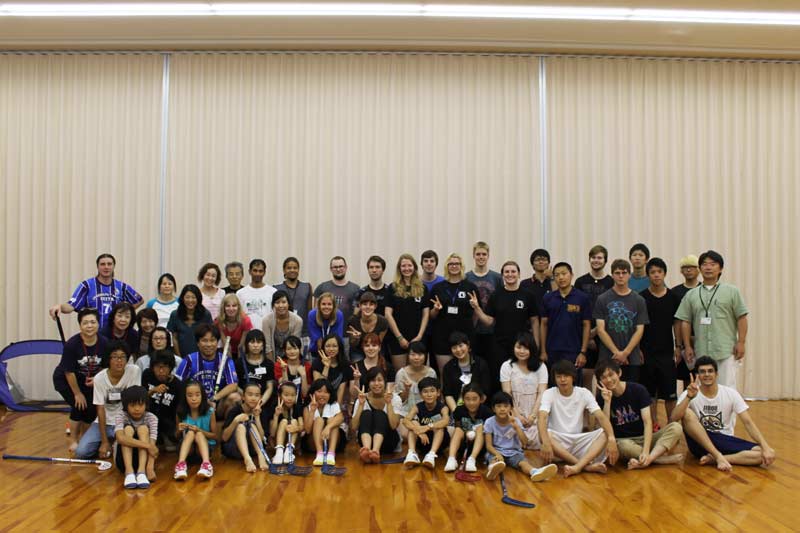 The plan today was to get to Kansaidaigakumae (in understandable English; the train stop in front of Kansai University) by 09:00 A.M. Not everyone met the given time so we were a bit late, but everything worked out in the end and around 09:30 A.M. we were ready to leave for Kansai University! It was a short walk and as we got closer to the university more and more students appeared around us. We were a real treat to watch apparently, because about every single one of them looked at us as we climbed the spiral stairs that led to the front gate (foreigners, ohmygosh!). It was really hot and personally I felt a bit ill, but once we got to the room World Campus International was assigned to we cooled down thanks to the wonderful invention called airconditioning. As we fooled around among ourselves a Japanese university student came in and called for our attention. She explained she was our host for the day and invited one of her professors to speak to us about Kansai University. Said professor gave us a lot of statistics about the university and told us about the partner universities all around the world which got some of our WCI members interested in an exchange programme.

When she was done we were instructed to be seated in groups consisting of both Japanese university students and World Campus Japan participants. In my group were two female students called Kaede and Yui, together with Nina from Denmark, Alvaro from Spain (officially a Dutchie) and myself. Therefore three countries had to be represented. We were given a large piece of paper and color markers and after talking about the differences in student life in those countries lined up all the points. Once every group had finished writing down their points we had to give a group presentation. It was actually really interesting to hear about how things work in, for example, Norway and Finland, and every person in the room was at least at some point in time surprised by hearing something new.

A while later we were given some presents: an uchiwa with the famous Big Wave (by Katsushika Hokusai) on it, a towel and lots of information documents. Since it was really hot outside those presents came as food to a starving man. And we got ￥500 worth of lunch money to spend in the university cafeteria! Yes for free moneyz. The cafeteria was a big place and compared to the Netherlands there was so much food to choose from. I got some fried shrimp with rice and it was the nicest thing I’d had all week.

After everyone was done eating we moved to the gym and changed into our work-out clothes. The next activity was innebandy! Also known as floorball, it’s a type of hockey played with different equipment and slightly different rules. We, along with Japanese university students, were grouped in teams and started practicing with each other. Then after about 15 minutes the real deal started; matches! Really, one second we were standing all set and ready to go and the next everyone was running and bumping and shooting away balls at an amazing speed. Lucky for me I played it in high school so I knew what to do, and that is to absolutely NOT attack, otherwise you’ll simply get smashed by the main players. It’s really fun though and after playing I really felt that I bonded more with the World Campus Japan members. I also made some new Japanese friends during the aftertalks (yay!), and I’m sure everyone had had a good time.

When everybody (including the Japanese children and elderly people who also played) was done we thanked everyone for a lovely day, handed over a Thank You card to our host student and all left for the train station, where our day came to an end and we all parted ways to our own host families.