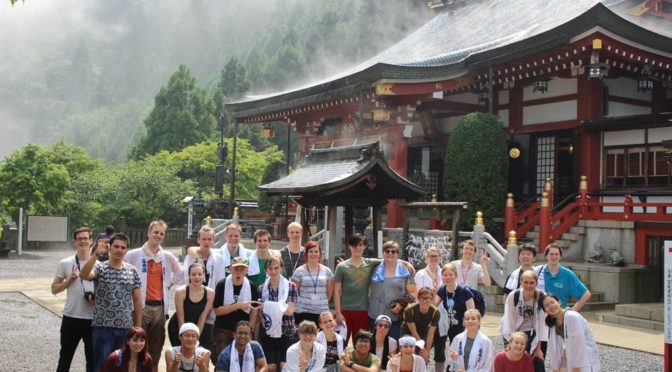 Today was the first activity day of a new city, Isehara, which I also happened to be the city runner of! So, definitely no extra stress for me there, none whatsoever! My host family happened to live just 100 meters from Oyama elementary school, which we would visit in the morning, so instead of going 15 km the wrong way just to come back I walked straight to the school. I was earlier than the rest of the group, so I had time to talk with the principal before the activities.

I have to say, I was really nervous having my first proper morning meeting after 1st Session, and I’m sure it showed. But the group is very diligent and hardworking, so we survived and headed out for the activities with the kids. We would interact with the kids, signing dozens of forms accommodated with the ever-repeating cycle of “Hello! My name is _ What’s your name? Nice to meet you!” until we became deaf to the words we spoke. It was fun though, and the kids were really cute. Also, by my experience with Japanese elementary school kids their English was really good. Afterwards we tried to play a traditional game with spinning tops, at which I failed spectacularly, for the second year in a row. At least no-one but me was hurt. Anyways. Finally, we got kanji for our names from the fifth and sixth graders and then tried to write them ourselves. I was dubbed “the friend in heavens”. Charming, although could be interpreted as somewhat sad as well.

After the school visit we had a delicious lunch of tofu in various forms. The lunch charged our batteries enough so that we were ready to tackle the final challenge of the day, climbing Mt. Oyama! We put on traditional pilgrim clothes and climbed the approach to the cable car station. When we reached the station, however, the dark, rainy clouds of doubt descended upon us, quite literally. Luckily though, the LOC were not shaken by small drizzle and we continued up the endless steps along the mountainside. Halfway up the mountain the rain got worse and towards the end we were running up waterfalls. Also, who had the great idea of making a hiking trail that consists of 97% stairs? In any case, we made our way to the top, drenched, exhausted and with a lifelong hatred of stairs, but happy at our achievement.

We had some time to gather our thoughts and change before we were given a tour of the shrine. We learned a lot of interesting things about the shrine, Oyama, connection between Shinto gods and Pokemon, and much more. It was a great ending to this very active day.