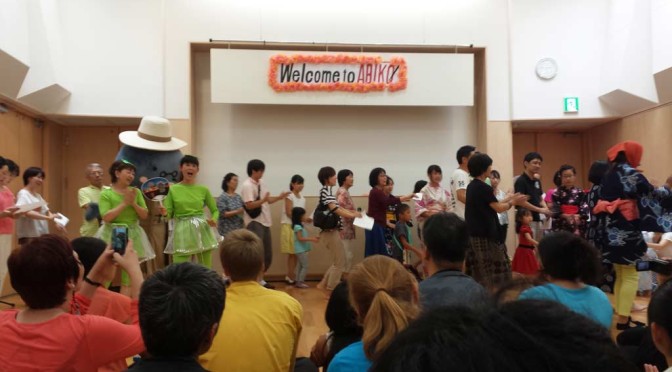 Our Arigatou event in Abiko was different in several areas compared to the previous ones I have experienced. This Arigatou event was not a thank-you-and-goodbye event, as it usually is, but rather a welcoming event. The Arigatou event was already scheduled at the session’s third day. Another difference was the large amount of host family members who were able to come and watch the event. Including World Campus Japan staff and participants, the room in which the Arigatou event took place contained almost 120 people.

The Arigatou event started with an introduction of every World Campus Japan participant and corresponding family. The participant and a family member then had the chance to briefly elaborate on first expressions of each other, as well as the chance of wishing each other a good time together. After the introduction we had a potluck party. All hosting families had really put an effort into cooking and preparing the most delicious Japanese food for everyone present at the Arigatou event.

The actual Arigatou event started after the potluck party. We had prepared a show for all the host families, which included Japanese medley dances, country trivia quizzes, as well as games to make all people in the room participate in the event. With 120 people in the room that turned out to be a small challenge. In the end however, it all worked out really well. Later, some members of the host families even performed for us!

The arigato event was a huge success, not only for the World Campus Japan participants, but also for the host families.