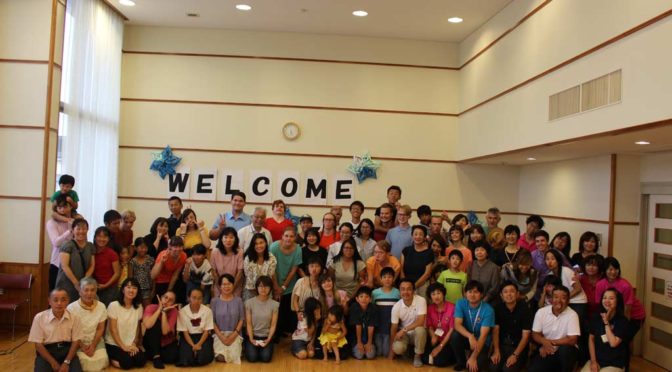 Woke up at 6:30 am as usual when my host mom knocked on the door. This morning however, the plans had been cancelled due to potential heavy rains and so I could sleep in. As much as I was disappointed about not going to the Kairokuen, I was quite tired and happy to sleep for a few more hours.

At 9 I got dressed and had breakfast with my host family. My host mother made a really tasty breakfast with eggs bacon and edamame and my favourite, curry bread.

After we had put away the dishes, we all headed to the Kokusai kouryo to meet with all the other families. On the way we noticed that it actually had barely rained. When we arrived, I quickly joined the other World Campus Japan members for a quick meeting before us all having fun playing games and singing silly songs with the families as well as enjoying the delicious food people brought for the potluck party!

I spent most of the time with my family, but especially with my host dad. We talked about a lot of things together including the education and a little bit about his trip to my country when he was younger.

After clean up, my family decided to still quickly take me to the Kairakuen, but now it was actually raining and very badly… Instead we decided to go visit the Kodokan, an important school where clansmen and their sons had gone to school to learn everything from mathematics to martial arts. The building was quite old but extremely beautiful. Because of the heavy rain, the garden surrounding the traditional Japanese building looked stunning and made the whole area seem like a movie set for a historical movie.

My host family also translated and explained all the panels that were only written in Japanese for me. When we left, the rain was much worse. After a short run in the rain, we made a quick stop at the shopping centre where we picked up some ingredients for dinner which was curry!

After we cooked together and ate, we watched a few game shows on TV together before finally going to bed early. The next day was Host family day, and we planned to leave as soon as possible the next morning and also hoped for no rain.