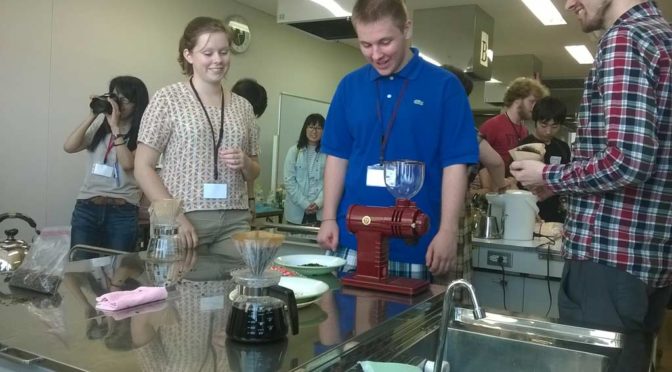 Today was our first day of activities with Japanese students, so I was excited about asking them on what they do and what their thoughts are.

We started today with a little experience exchange on how we we’re socialising with our host families. Not surprisingly, people only had good things to say about their host families. As did I.

As introductions with the volunteering students we started playing rock, paper, scissors (in Japanese: “janken pon!”) combined with names to get to know each other. Then we moved on to other social games to continue to break the ice. Spirits were high before we ventured into a more serious territory where a line was drawn on the floor and we were supposed to takes sides on difficult questions like “should it be mandatory to vote?” and “should we remove all the worlds borders?”. It was interesting to see the stands people took. Especially that no country had a unified stand. As far as I could tell most countries had different opinions about the questions. An important lesson in why tolerance and understanding is important in politics all over the world.

After our ice breaking session we had lunch with the students where the mutual interest in each other became apparent. Everybody asked each other a lot of questions on studying, daily lives and interests and a lot of common ground were found. I thought that everybody’s enthusiasm was reinvigorating and it made me look forward to more interaction with likeminded Japanese.

Then it was time for handcrafts where we learned how to roast coffee beans and make them into a nice cup of hand brewed coffee. And when we were all jacked up on caffeine we got into the next room where we where greeted by a room full of origami masters who presented us a samurai hat and promised us that in 30 minutes time we would also have folded a square piece of flat paper to something that three-dimensional and exciting. And so we did, and the result was amazing! After finishing the hat my host family came to visit me and the oldest son joined in and together we folded colourful birds to hang up when we got home. At times people were yelling out of frustration, but were quickly aided by origami experts to get them back on track. Experienced people to the rescue! And a learning experience by the people less experienced.

We finished the day of with more games with a bunch of the kids who came to see what all the fuzz was about, and we played games such as “daruma-san ga koronda” which is a kind of green light, red light game. It proved that being small and fast definitely can have its advantages, while my almost 2 meters and plus 100 kg didn’t serve me well. But I had fun. It was followed by more games, where I saw grown women (you know who you are) throw themselves on top of children in an attempt not to loose the game. Everybody laughed and only tears of laughter were shed. In the end we played a game with a name I cant remember, but it involved people sitting in the middle of a big circle and answering three questions the other participants had. Boys were for example asked if they had girlfriends and other people were asked to share stories of interest.

One of the counsellors host sister from the previous session had travelled all the way to Suita to join us in our activities. It was a testament to the dedication the host families, local organising communities and everybody else supporting the World Campus International organisation. Because of this dedication we thanked the voluntary students for spending the day with us by giving them our signed pictures as token of our appreciation. An appreciation of the new wonderful memories we received. And I can’t wait for more memories to come…