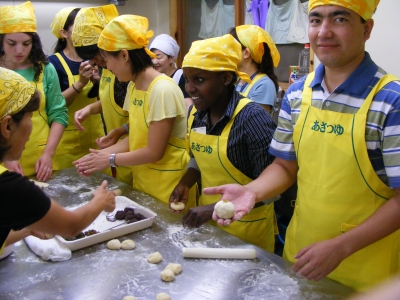 July 1st was quite a scrumptious day for both mind and body. In the morning, a local farmer, equipped with samples of fresh tomatoes, cucumbers, and cherries, lectured the class on the farmer’s market of Ueda City. The delicious assortment of organic produce complemented the informative speech perfectly. The taste of the vegetables and fruits turns out to be rather dependent on the type of soil.

Even though his entire speech was in Japanese, it was fairly easy to recognize the passion the man had for his work. His life mission is to make organic, all natural crops a viable option for both the farmer and the consumer. The benefits of foodstuffs without the taint of chemicals such as pesticides cannot be denied but often times the price is much higher than the non-organic variety. To offset some of the cost, a farmer’s market was established in Ueda. A group of over 200 local farmers are able to sell their fresh goods there each day. With the large amount of possible sellers, the price goes down accordingly. Although, the competition is fierce in the farmer’s market, farming organically becomes feasible due to the huge numbers of consumers.

The visit to the actual market provided our taste buds with even more delights. After donning some colorful aprons and head bands, the World Campus — Japan participants were taught how to make oyaki, a traditional dumpling of the area. There were two types of dumplings, one filled with a sweet bean paste and the other with some type of pickled vegetable and both were mouth-watering good. The dumplings are cooked each day and packaged to sell right in the kitchen of the farmer’s market. As such, the store does not only sell organic produce but also fresh baked goods, such as breads, cookies, and dumplings.

A society cannot exist without a reliable food supply but in recent years, reliable foods are just not good enough. There is a conscious move towards healthier and more organic foods. In Ueda City, we learned that the high demand for natural foods is being met by the local farmer’s market.