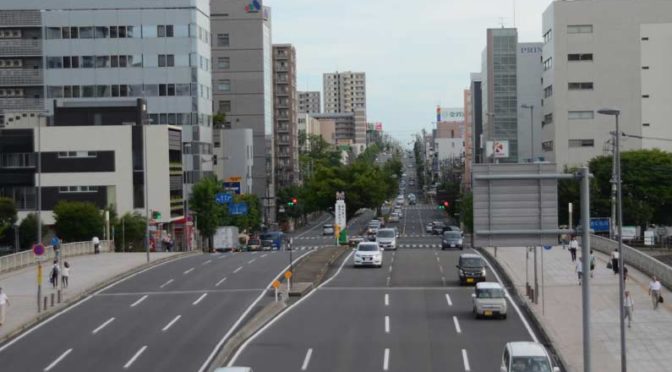 I’ve actually managed to make myself to believe that I’ve adjusted to the heat here in Japan. As the day went on, I realized how wrong I was! The feeling you get isn’t that you’re sweating. It’s more that you start to get a gooey feeling all over your body from the heat. It’s like your skin is slowly leaking out the water in your body.

But enough about me trying to deal with a heat and humidity uncommon to Sweden. The personal day for has felt like some kind of sanctuary for me, since everything during this program has been outside the box for me. I’ve been panicking like crazy and felt like just disappearing into thin air. During Wednesday evening, that feeling luckily left me. Thursday was fine and today I’ve just been enjoying myself, the time with my host family and the time I spent on my own today.

After Oba-san served lunch for me and Taiki, the younger of the two brothers I’m staying with, we ended up folding origami together. I can’t communicate that well with Oba-san, since my Japanese isn’t good enough. I find this quite sad, since I would love to hear about the Japan she used to live in when she was young. After Masaki returned home from school, they gave me a ride to the climbing gym. That was a good thing, since it was a bit tricky to find the gym. They were so worried about me that they even called beforehand. After a brief explanation about how the facility worked I got to enjoy some great climbing. That was, of course, after convincing my host family that I would be ok with going to Mito station by myself. As I’ve been living by myself and traveling a lot by myself, I’m incredibly independent in a way. This is to the extreme that I sometimes feel suffocated by my host family and their care. So being able to at least spend some time on my own is a great vent for me during these occasions.

During my walk to the station I boosted my ego in Japanese language. This was because I got lost on the way several times. Did I mention that I have no internet on my phone except for Wi-Fi? Somehow my phone just hates Japanese sim-cards. Some people might find it crippling to walk around without any internet access on their phone. I, on the other hand, find it extremely handy. This is because I have to interact with people and actually try to find a way around some obstacles. I feel that this is definitely something to try out a bit more in Sweden. I also walked past some kids on the way to Mito station. They stared at me and were so happy to meet a foreigner. They greeted me in both Japanese and English. Sometimes it’s the little things that create memories for some.

Since I’m without internet, I got a bit worried at the station. Have the others gone on without me? Did we miss each other? Well, worst case scenario, I’ll just eat alone and bend the truth a little to ensure my host family that we were having fun as a group. As things turned out, we met up without any drama though and quickly went for an Izakaya. We ran into some minor problems though. Curse those minors, always getting in our way of consuming the nectar of the gods, known as alcohol! But we found a place where everyone was allowed and got to ordering. I feel a bit sad for the waiter though, since we couldn’t get our order straight in the beginning. You could hear that he got a bit frustrated at us too. I ended up taking care of the children, like a good uncle. This was fine for me since I’m restrictive with consuming alcohol while representing a company or an organisation.

When I returned home to my kind host family, I surprised the boys with a small gift. After eating an evening snack my host family surprised me with presents for me and my family. The world certainly needs more of this. Not the gift giving but the part where you’re mindful of others. As we sit down I start thinking about one thing. It must be a big step for my host family, letting someone in like this. It makes me think about my foster family and what a big step it must have been for them to accept someone into their family. That’s what my host family has done for me. They’ve accepted me into their family. This is such a humbling feeling for me. I can’t possibly find any words to describe this feeling, except that I feel a lot of gratitude towards them. I also feel a lot of joy for them being so relaxed around me, it’s like I’m a family member now. It gives proof to that family isn’t blood, it’s the relations you build with the people around you.