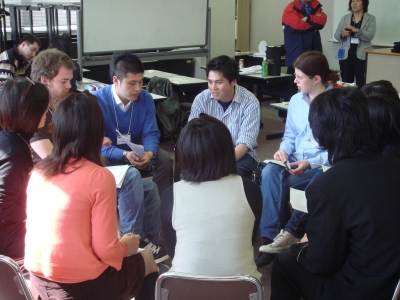 The city theme for Kumamoto City was Valuing Human Life. I found it to be a very broad theme and a hard one to discuss. Maybe it is better if I come to my own conclusion after giving a brief summary of the things we did based on this theme in the lively city of Kumamoto.

Early in the week we visited the famous Jikkei hospital, where last year a baby hatch program was established. The hatch, which is still the only one in Japan, is a place where a person can anonymously drop off his or her baby. The debate about whether or not it should exist in Japan is still a hot topic. On one hand, it is a place of last resort, a sort of solution for really desperate people. On the other hand, it may induce an opposite effect and form an easy way out for parents who may have regrets later on. In the end I think that the controversy will remain, but I think the visit to Jikkei hospital showed another important aspect to the issue. It offered more than a hatch as a last resort, including counseling programs for parents as an alternative. The hospital is a pioneer in the field of counselling for pregnant mothers and future parents. This is definitely an endeavor which should be supported.

We also had the opportunity to visit Minamata city. In the industrial rise after the second world war, the Chisso company polluted the bay with methylmercury for years resulting in the poisoning of a portion of the population in that area. Maybe even more impactful than the pollution was the aftermath of the disaster. This event coresponded 100% to our theme. How do you repay someone who has been deliberately poisoned by a company? What should happen when someone does not value human life? The answers to these questions will remain unknown, but I think the most important thing is that we keep thinking about things like this and their impact on people and the environment.

The third visit we made was to a facility for Hansen disease victims. There we heard a lecture on the topic and learned how people in the past and present responded to other people who were infected with this disease. I think everyone learned a valuable lesson. Maybe the participants views upon other diseases like aids and cancer may have slightly changed after seeing how Hansen disease patients were mistreated. After all, learning from one’s mistakes is nice, but also learning from someone else’s mistakes is even better.

I think each one of us has a richer viewpoint regarding valuing human life than before, but we may also say that we have realised the depth of the question. Human life has such great value that the only option is to try and honor someone elses life as you would your own. You want to place yourself into different positions, including the position of the “victim” before making a decision. I think that by visiting these places everyone within World Campus International has placed him or herself into other positions when considering the above topics.