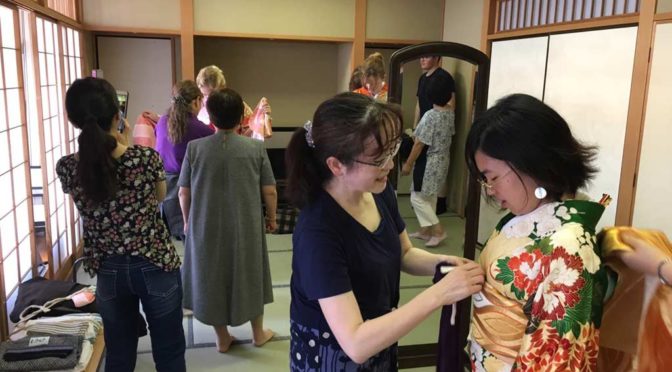 Wednesday the 7th of August was the first day of the last week of our great trip around Kanto area. We had had lot of fun times in Mito and afterwards in Abiko, but now was time for the city of Tama.

The first thing in the morning, we got to try out traditional Japanese clothing – kimonos. Each member of our group was dressed up by a bunch of lovely and enthusiastic ladies, all the while we could only raise our hands and let them do their work. Personally I really like this type of clothing and found it really fun to dress up in a few different outfit combinations for the photoshoot we had afterwards.

When everyone had at least tried on the clothes and had some pictures taken, we had a small parade around the building. Some of us were a bit uncomfortable about being presented as dressed up foreigners for the entertainment of the local people, but I just took it by the stride and enjoyed my time playing a Japanese flute, shinobue, to make most out of the experience. The parade ended at a stage, where we could try our hand at traditional Japanese games, while still in our fancy clothes. Not gonna lie, juggling or playing with a kendama with big floppy sleeves was not the easiest thing to do…

After lunch, it was time to try on a different traditional Japanese costume – Happi coat. Though not as fancy as the kimonos, it was a nice experience to try those too. In our new costumes we continued onwards with activities. From here we showed the audience the dance we had prepared for the arigatou event and gave them a few short presentations of some of our home countries.
The highlight of the afternoon for me, personally, was the activity following that. We got to try our hand at playing either a Japanese harp, koto, or one of the Japanese flutes, shakuhachi. While I would’ve loved to try out their shakuhachis, time only allowed for us to try one instrument, so I had fund picking sounds out of the koto.

The last activity of the day made us feel like proper celebrities for we got to give out autographs. It would’ve been great fun, if the kids wouldn’t have wanted us to draw something along with giving the autograph. I decided to give my signing seat to another participant after a few signatures to save the rest of the kids from my… “Art”…
All in all we had great fun!