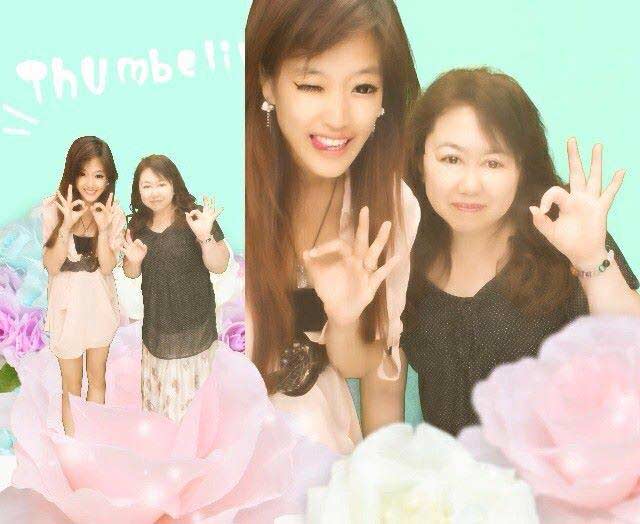 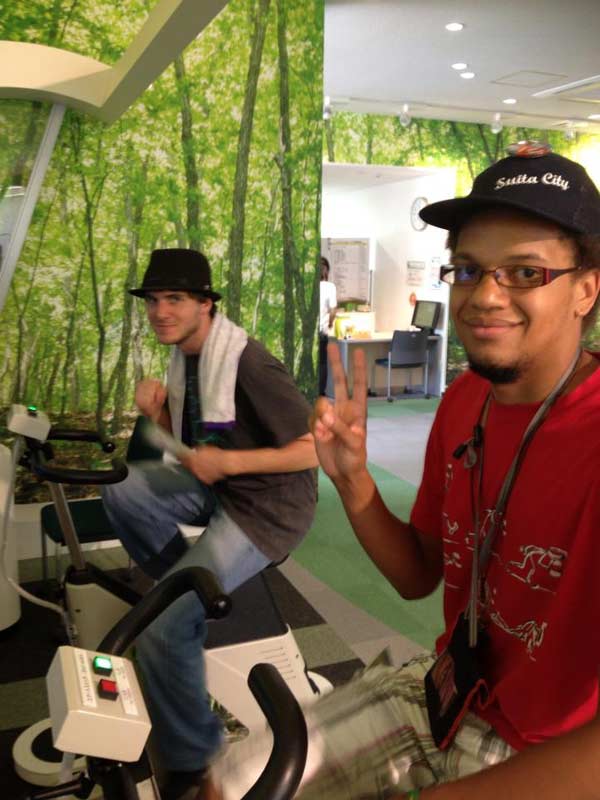 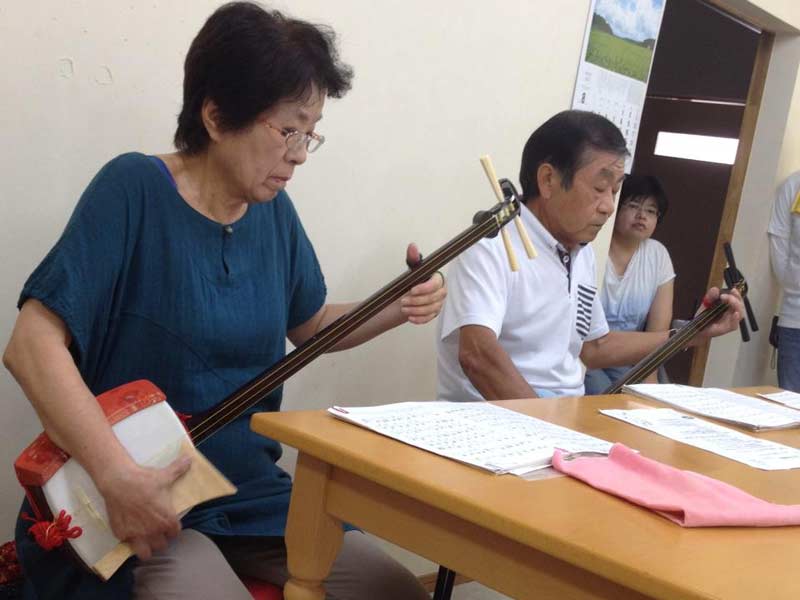 Not being able to join everyone to a two night stay in the mountains, I was finally able to meet everyone at the Ecofull town in Toyota city. There we learned about how Toyota city is trying to change to a more environmentally friendly area, especially after the disastrous flood in 2010 that had cost the city a great deal of forestry. The experiences included a chance to see a future smart house which currently 65 residents in Toyota own on a trial basis. With the smart house, one is able to conserve energy, and also at the same time be conscious about the environment we live in and how we can save a little more money.

For lunch we interacted with local community members and at the same time ate together as well as we exchanged a little bit about each other. Following lunch was a chance to listen to shamisen which is a traditional Japanese instrument made from cat fur. Finally after the experience with local community members, we were all able to meet our host families. My host mom was Naomi Sugawara and we have been looking forward to meeting each other for two weeks! Nao-mama and I have been emailing each other and we finally got to meet face to face! That night we took purikura pictures together and ate kaitenzushi. I look forward to making more memories with Nao-mama!! 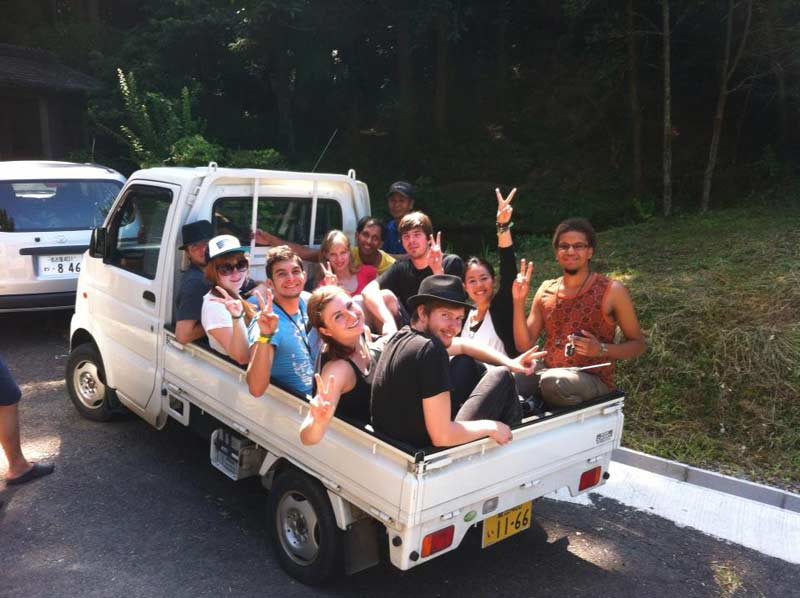 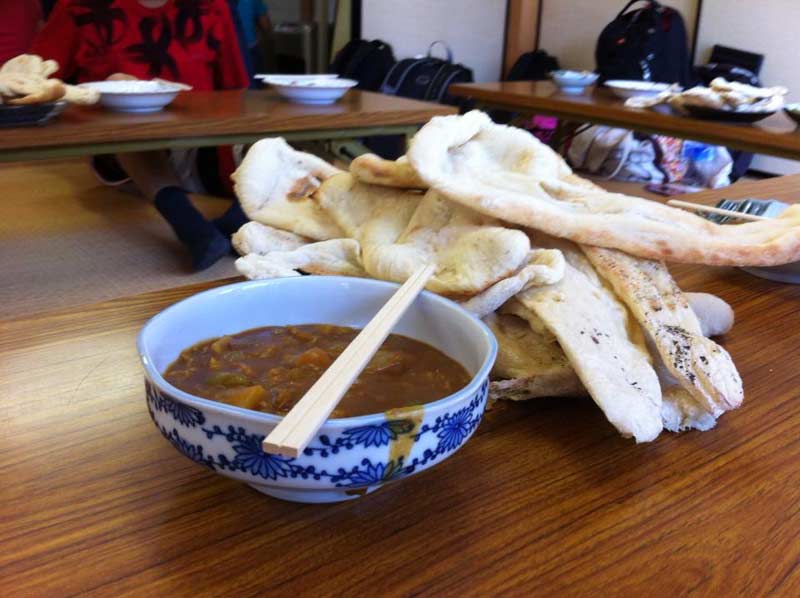 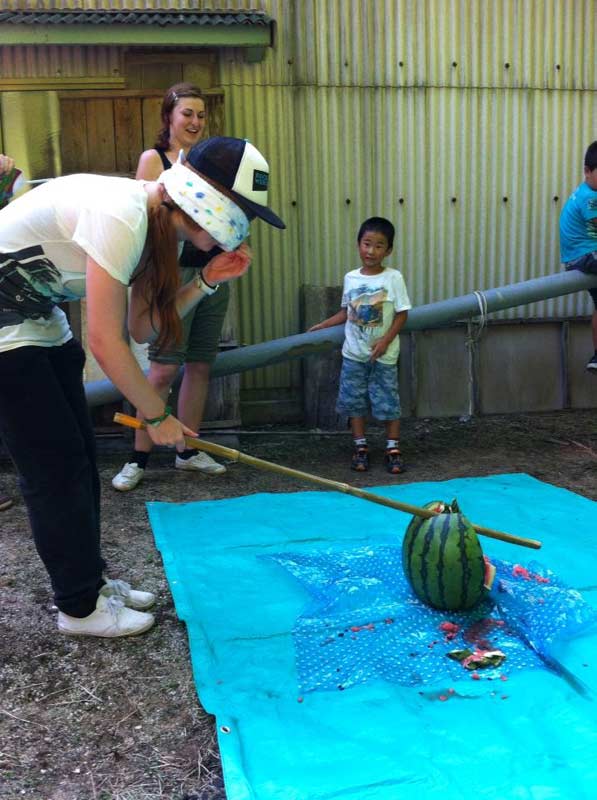 Today, after eating our breakfast and rolling up our futons, we all got on the back of a little pickup truck and headed to our destination to interact with the locals.

We arrived early so most of the people weren’t there so we chatted with those who were already there. When everyone got together we split up in groups and did some games to break the ice. After getting to know each other we went into the fields to harvest vegetables. The sun was scorching that day but it was a lot picking up the vegetables (and the tomatoes were especially delicious!).

After harvesting a bunch of vegetables we got back to the facility and started cooking the curry and Naan bread (a type of Indian bread). One thing for sure was that a lot of people cried, since we had a lot of onions to slice. After cooking everything we sat down and ate together, it was so delicious! Curry really goes well with Naan bread!

After lunch we played a scavenger hunt with our group. We had to take a picture of a very specific plant that only grew in that area, a funny picture with one of the locals, and capture three types of insects. Needless to say, I wasn’t very keen on catching bugs but it was actually a fun experience! After that we got to play a game where you have to smash a watermelon in half whilst blindfolded, it was a lot of fun and the watermelon was really refreshing after all the fun we had! After that we said goodbye and went to refresh ourselves in the river and then we went to the onsen to get nice and clean.

That night the innkeeper had made us a feast and we had a very good time together chatting and listening to music. Today was a very nice day, I wish we had more time to enjoy the mountains, but we have left to the city now for a new adventure so I’m excited and looking forward to meet the host families!

Too hard to say goodbye.

Today is our last day in Abiko. It is so hard to describe it as last but in fact it is. Maybe the farewell always makes people very sad and be cast down no matter how unwilling you are.

Standing in front of the house of my host family, the sight casts my mind back to the days when we passed it together. From strange to familiar, from stranger to dear ones, we have experienced so many events and left deep impressions on each other.

Due to the diplomatic relation between Japan and my country not being very good at the moment, I was a bit worried when I arrived at Abiko. I considered that maybe Japanese people would not be very friendly to me because of the conflict we have with each other. I even prepared for confronting with many incisive questions asked by Japanese people.

But in fact, I was wrong. They were free from prejudice against Chinese people and they showed their enthusiasm for taking care of me, an ordinary Chinese person, as if I was their son or relative. Their behavior touched me to the depths of my soul, so deeply that I could not help clapping for the Japanese people when we had the arigato event.

I suggest that through friendly behavior from both countries, China and Japan will return to a normal relation in the end. And that is why I chose this hard time to come to Japan in order to communicate with Japanese people.

Now I would like to share you with a prayer of Saint Francis of Assisi as an end of this article and make a wish to the people like me who are willing to resume the relation between our two countries:

It is too hard to say goodbye but a new tour begins. Abiko, I miss you so much! 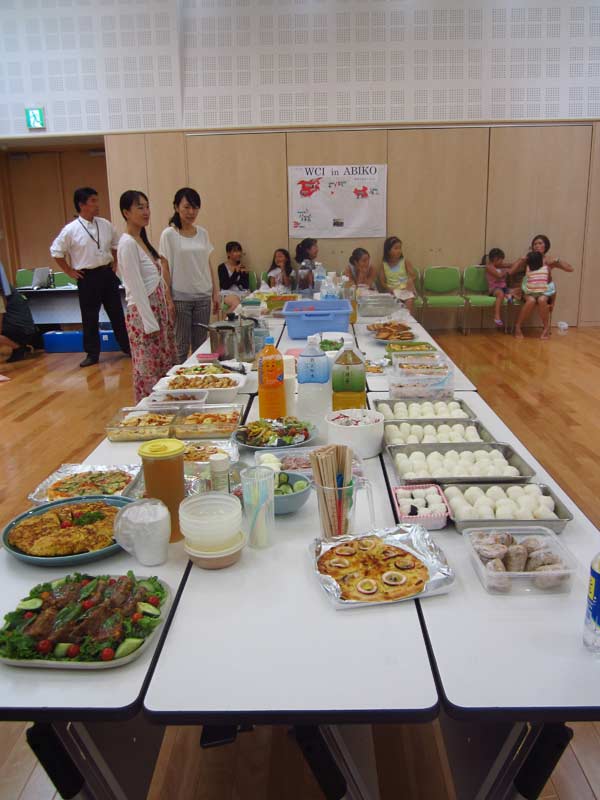 Today was my first “Arigato Event” with World Campus Japan, it was quite the experience. Lunch consisted of various dishes from everyone’s home country; it was truly an international smorgasbord. While very embarrassing, the dances were fun because I could tell my host family really enjoyed watching the performances. The crowd really did love our surprise opening to Michael Jackson’s “Beat It”. I was happy I decided to read aloud my thank you letter; I received many compliments on my Japanese from my host family as well as others.

It is a strange feeling to get to know a family so well over the course of a short week. While this week has been a lot of fun and I will miss my host family in Abiko, I am excited for what adventures await me in Nagoya!

Today was a really interesting day; we went to a temple to interact with the local children and to learn about some aspects of Japanese culture. There were a lot of young children from a nearby school with whom we were going to make our own fans. It was a lot of fun to color with the children and to decorate our fans with stickers and origami, and it seemed that the children also had a really great time. When we had finished making our fans the teachers of the school did a little dance performance for us, and they asked us to join in. After doing the dance a couple of times it was time for our lunch. We sat down with the children and ate our lunch together while we talked and played with the kids. It was really too bad that they all had to leave after the lunch.

When we were done eating we started the first cultural activity: shakyo. Shakyo is basically the writing of Buddhist texts as an offering to Buddha. We could choose whether we wanted to do this the easy way (drawing over the characters that had already been drawn on a sheet) or the hard way (draw the characters ourselves). Most of us, including me, chose the hard way, and even though it was quite difficult to draw the characters it was a lot of fun to do.

The next activity was rakugo, a form of Japanese comedy. There was a rakugo player who explained the different kinds of jokes to us, like word jokes, quizzes, and short stories. The short stories were a lot of fun to watch, and luckily we also got a translation sheet in case we did not understand the Japanese. The quizzes were really funny as well; we all tried our best to find the solution to the different puzzles as fast as possible. Finally, the rakugo player also chose three people from the audience to which he taught how to act like you are eating a bowl of noodles, and these people had to perform for us as well.

After the rakugo we had furoshiki as our final activity. Furoshiki is the art of cloth wrapping, something that is quite popular in Japan. It is used when wrapping gifts, making small pouches and you can even make a shopping bag! The first thing we were taught was how to make a small hat for ourselves, and next how to make a small pouch to attach to our belt. After that we learned how to wrap a wine bottle, and the next step was to wrap two wine bottles in the same cloth. It was a lot of fun to do, and it really made me realize how handy a piece of cloth can actually be. At the end we also witnessed something really amazing: there was a special piece of waterproof cloth in which a full bottle of water was poured, but the cloth did not get wet at all! So not only did I have a really great time playing with the kids, trying shakyo the hard way, and watching a really funny rakugo performance, I also now know that I should always take a piece of cloth with me, because you never know when you might need it.