Today we went to the Toyota factory. Although it was short, and we only got to see a small part of the factory, it was very impressive. The most amazing thing we saw was a line of robots that all moved at the same time and burned pieces of the car together. I felt as if I were in a science fiction movie. After that we went to the Toyota museum. It also looked a little futuristic. We saw a robot that had lungs and could play trumpet by itself, and many other cool things. 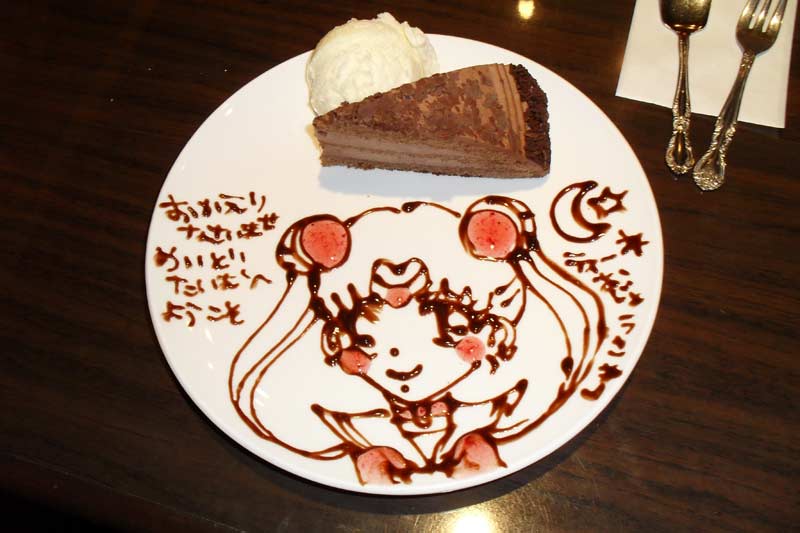 We had lunch all together in a Chinese restaurant – it was good! In the afternoon, the participants either had a half “personal day” or a half “host family day”. Together with Dieter (Belgium) and Maria (Norway) we went to the Osukannon shopping street in Nagoya. We visited a temple, and after on we went to a Neko café and a maid café. A Neko café is a café where you can pet cats and just relax. It was very calming, but we had the most fun in the maid café. A maid café is a place where you are served by girls in cute maid costumes. We got to eat delicious cakes, and we had the time of our lives – it was a great experience! The maids drew pretty drawings on our plates with chocolate and strawberry sauce. I recommend everyone to visit a maid café at least once – you won’t regret it! 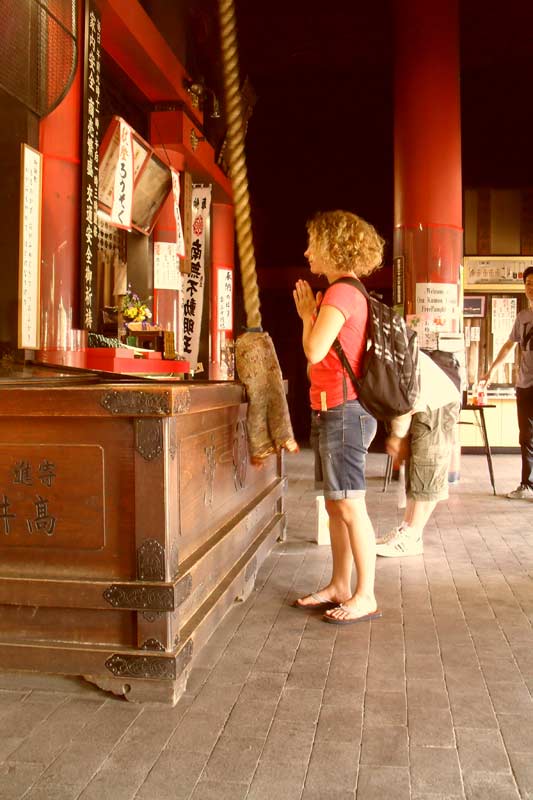 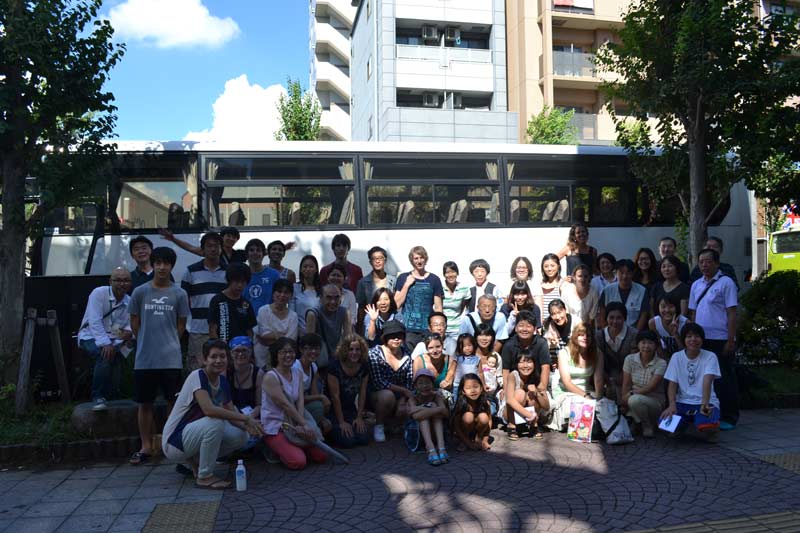 The ten-day-long program finished so quickly in Abiko. Today our Toyota program starts. After say good-bye to the tough Abiko people, we were driven by bus for 7.5 hours, and then we arrived at Toyota, Aichi prefecture. After the greetings by the LOC and Hiro-san, the matching started. However, this city’s matching was carried out by a game. Everyone took off their name tags, and we started the game without introducing ourselves. The first game was a “Leader Jyan-ken” – Rock, paper, scissors. Of course, the normal version isn’t fun enough, so each movement was some feature connected to Toyota City and the surrounding cities. The movements were “car”, “maple leaf”, “canoe” and “peach”. We were taught those movements, and if the movement we did was the same as the leader – the person in the middle of the circle – did, the person was out of the game, and the final person left was the winner. Next game was “数合わせゲーム”. We danced to music, and after that a person called a number from 1 to 10 in that person’s language. We made a small circle according to the called number, and if in the group there was a host family and the person they were going to host, happily the matching was a success. The host families already had some information, so to check if they had found their person, they asked us some questions. Some people meet quickly, however was I one of the last four people. Then a host family called some information, and I could finally meet them. The five days we’re going to spend in this city is too short, but I hope we can enjoy every single day as good conclusion to World Campus International 2012. 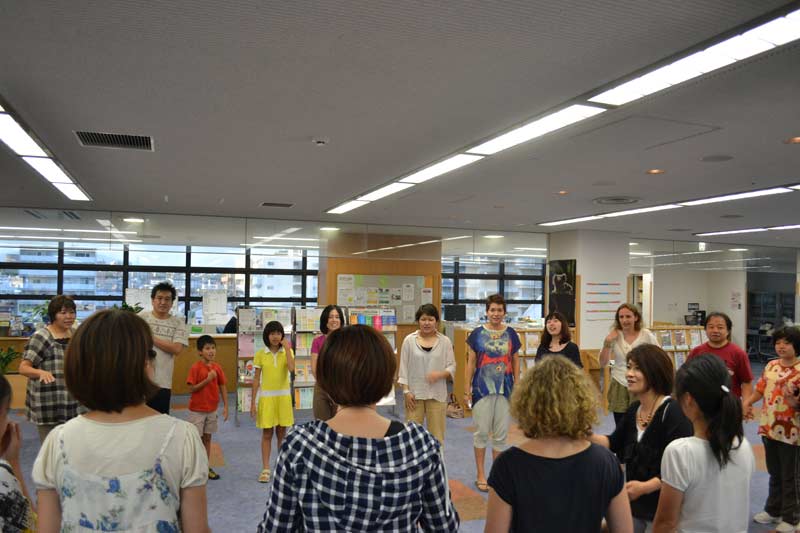 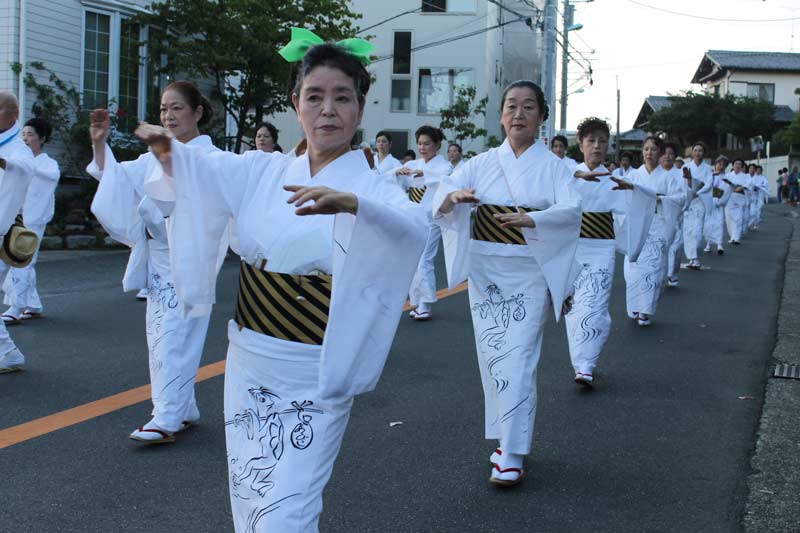 Today was a great experience! We were given the opportunity to help out the community by setting up the Kappa matsuri (kappa festival) that was held that day. In the morning we pulled our half-awake bodies together and set up a big amount of bamboo candles, including the ones that we made earlier this week. This took a fair amount of time, as we decorated a path that would be crossed by about 10.000 people that day. Although we were exhausted after clearing the job, the result of our work that would become visible by nightfall, was totally worth it. When it was time for lunch, we joined in with the locals and fished for our soumen (noodles) that came floating by on a 60m long bamboo structure. Those who lacked the dexterity to fill their stomachs with soumen were saved by the LOC with McDonalds meals. With our bodies reenergized, we joined the Kappa dance parade for which we learned the dance earlier this week. Some of us were dressed up as Kappas or some other funny creature and others were holding their country’s flag. It was entertaining to see thousands of local people react on a group of foreigners like ourselves, dancing one of their traditional dances. I’m very happy that I got this rare opportunity to be so involved with local culture. After the parade, people gathered at a central area in the park where food and drinks were sold and soon people started dancing and singing, giving it a real local festival feeling. The day ended with an amazing fireworks show, which was the cherry on the pie that I would love to re-eat someday. 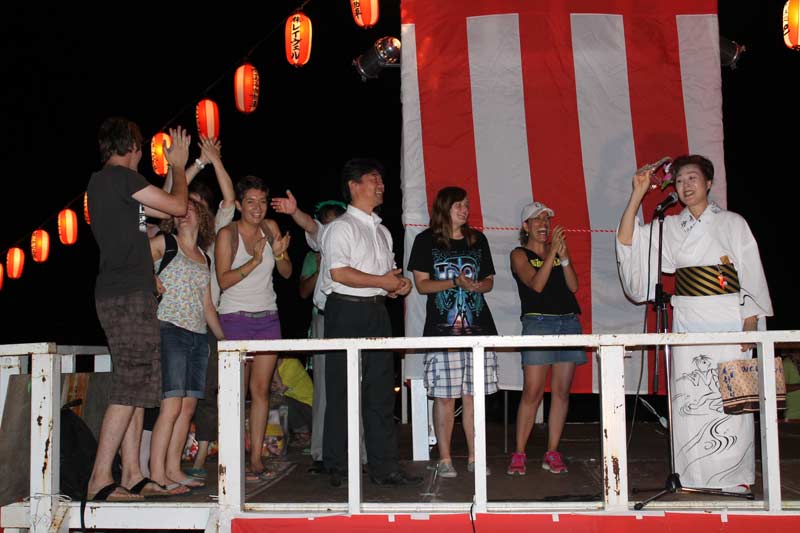